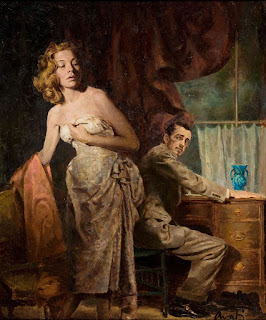 Clyde had been staring at the blank first page of his new novel. All he had so far was the title: Chronicles of a Planet Called Mook: Volume One.

“What’s the matter with the way I’m dressed?”

“Nothing, baby. You look nice.”

“You think maybe I should go to the A&P wearing curlers and a housecoat like the rest of them broads?”

“I might be a while. I told Madge I’d meet her for lunch at the automat.”

Mabel headed out the door, and down the four flights of stairs to the Bowery. She would have to ring up Madge and tell her that they were supposed to have had lunch at the automat.