The Memoirs of Arnold Schnabel: "Buddha" 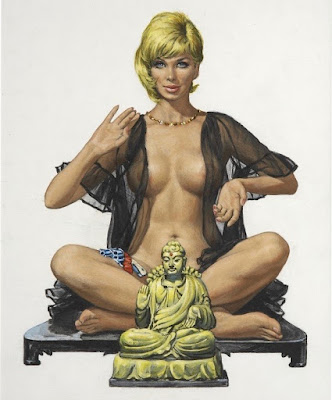 After a lengthy break during which we published Railroad Train to Heaven, Volume One of the Memoirs of Arnold Schnabel™ (available here), let us now rejoin our hero here in the “pad” of his new friend “Wiggly Jones, the little hippie boy”, where Wiggly’s Buddha-shaped cigarette lighter has now begun to speak...

“Surely the proposed publication of the entirety of Arnold Schnabel’s sprawling chef-d'œuvre must be considered the literary ‘event’ of the 21st century.” – Harold Bloom, in The Cape May Pennysaver Literary Supplement.


“Nothing,” repeated the Buddha. “What are you, trying to get all zen with me?”

“Hey, man, sir,” said Wiggly, and the Buddha turned to face him.

“I’ll repeat my question. Were you trying to be zen?”

“No,” I said, “although I think Wiggly said something about it –”

The Buddha glanced briefly at Wiggly, and then turned to me again.

“And it didn’t occur to you to ask Wiggly what the word meant?”

“I don’t know what many words mean,” I said.

He put the enormous reefer into his mouth and sucked on it, but it had gone out.

“Arnold. So I gather, Arnold, that your conversations tend to be, shall we say, convoluted.”

“Yes, sir,” I said, like this conversation, I thought, but didn’t say.

“Would you like to know what zen means?” said the little Buddha.

“I know what zen is!” said Wiggly, who was shuffling through the magazines and papers and books on the table top with one hand, while with the other he held that enormous reefer aloft.

“I’m not talking to you, hippie boy,” said the Buddha, and he turned to give Wiggly another look.

“You know what zen masters do when young punks like you try to show off their knowledge?”

“Yes,” said the Buddha. “So unless you want to get slapped then keep your mouth shut until you’re spoken to.”

“Don’t tell me to be cool. I invented being cool.”

“And what are you doing?” said the Buddha.

“What am I, chopped liver as you Americans say?”

“You mean you want me to use you to light my joint, sir?”

“Then stop fussing around with that rubbish and light up.”

“Okay, man,” said Wiggly, and he picked the Buddha up, clicked the little lever on the lighter mechanism on the Buddha’s lap, and lit his reefer.

“Now put me down,” said the Buddha.

“Yes, sir, man,” said Wiggly, holding in the marijuana smoke, and he laid the Buddha back down on the coffee table.

“Yes,” I said. At last someone who could remember my name, even if he was just a talking table lighter.

Retroactively I became aware that Wiggly had finally exhaled another great cloud of marijuana smoke, and that his arm now extended through this swirling thick cloud and the hand at the end of his arm held that big fat reefer just a few inches from my face. I took the reefer and I put the unlit end in my mouth and drew deeply upon it.

“Don’t let me stop you,” said the Buddha.

I didn’t, and I drew deeply on that enormous reefer and held the smoke in. I was becoming an adept.

“Splendid. Now, have you at least heard of me, the Buddha? Or of the eponymous religion known as Buddhism?”

Had I? I must have, or else how would I even know that he was the Buddha, and not just some little fat oriental fellow.

I became aware that I was still holding in the reefer smoke, and so I let it out, another great swirling roiling cloud, and in this cloud I saw the cool smoke-filled back room of my friends’ jewelry shop on a certain blazing hot afternoon just a week or two or nine or ten years ago.

“Yes,” I said, “I do know a little about Buddhism. This guy I know named Gypsy Dave told me all about it –”

“I should think not.”

I took another big drag of the reefer, but, again, don’t ask me why.

Wiggly held out his hand. Why was he holding out his hand to me. Did he want me to shake it? But why? I didn’t want to seem rude, and so, since I was holding the reefer in my right hand, I transferred it to my left, and took Wiggly’s hand in my right hand and gave it a modest shake.

“Hey, man,” said Wiggly, “I like appreciate the sentiment, but how about passing the doobie?”

“So,” said the Buddha, addressing me.

“Pray tell, what did this Gypsy Dave tell you?”

“About you, and Buddhism?”

He paused before answering.

“Yes,” he said, and I could tell he was really getting annoyed with me, even if he was the Buddha, so I dove right in.

“Right, sorry, the Bodhi Tree, didn’t you sit under it for a long time, seeking enlightenment and whatnot?”

“To answer your question, yes, I did sit under the so-called ‘Bodhi tree’ for quite some time. Forty-nine days to be precise, give or take an hour. I wonder if you would be prepared to do the same.”

“So you don’t care if you become enlightened or not.”

“Let’s put it this way, my friend, if you’re not honest I’ll be able to tell, and I’ll fly up from this coffee table and slap you so hard your head will spin. So for your own sake I would say, yes, please be honest.”

“Okay,” I said, “well, to answer your question, yes, I would like to become enlightened, but probably not if I had to sit under a tree for a long time.”

“And what, may I ask, would you consider to be a long time?”

“Could I have some books, or, you know, magazines to read?”

“Absolutely not. You’re supposed to be meditating, not reading some trashy novel or magazine.”

“Well,” I said, “in that case I think I would start to get really antsy after an hour or so.”

By this time Wiggly had taken a few more ‘tokes’ of the big reefer, and he now handed it back to me. I ‘toked’ again. What did I have to lose? I was conversing with a table lighter. How could a little more reefer smoke make any difference at this point? Of course I realize now that a little more reefer smoke might very well have made quite a big difference, but I wasn’t thinking straight, to say the least, and I was thinking less straight with each deep drag I took off that huge reefer of Wiggly’s.

I exhaled another great cloud of smoke, and once more proffered the reefer to Wiggly, but he held up his hand, like an Indian saying “How”.

I figured I also had had enough, for the time being, so I gently stubbed the reefer out in that ashtray almost filled with the stubs of previous reefers.

“An hour and a half,” said the Buddha.

“A hour and a half is all you could take of sitting meditating under the Bodhi Tree.”

I thought about it.

The Buddha paused before speaking again. It was an awkward pause, but then aren’t they all?

“You remember what I said, Arnold,” he said, after what was probably only half a minute, but it felt longer. “I can tell if you’re lying.”

Maybe he could tell if I was lying, but I wasn’t so sure that I could. I decided to play it safe.

“And hour and a half is all you could spare to meditate even if the result of this meditation was complete spiritual enlightenment."

“Maybe just an hour,” I said, in all truthfulness, or as much truthfulness as I could muster at the moment.

(Continued here, and onward,  until every last one of those dime store black-and-white marble copybooks filled with Arnold’s Palmer Method handwriting has been transcribed, with only the most egregious misspellings silently corrected.)