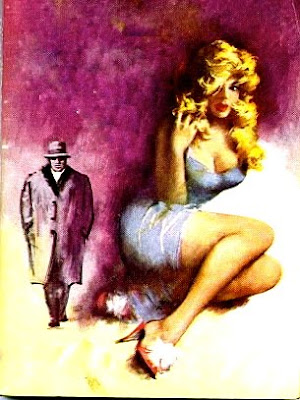 “So, Babs,” said Myrtle, after they had both taken their first appreciative sips of their bone-dry martinis, “how are things out on Sunnyville Manor Road?”


“Oh, fine,” said Babs, lighting up another cigarette. Fine, she thought. My husband is addicted to Dexedrine, my eight-year-old daughter insists on wearing a Davy Crockett costume everywhere, and my ten-year-old son wears a beret and affects an English accent. “Everything’s just dandy, Myrt.”

Never a good sign when Myrtle started calling her Babsy, but Babs considered the question for a few seconds and could honestly think of only one thing:

(Scroll down the right-hand column of this page to find a listing of links to the opening passages of some other fine but sadly out-of-print novels by Horace P. Sternwall.)
Posted by Dan Leo at 5:37:00 PM