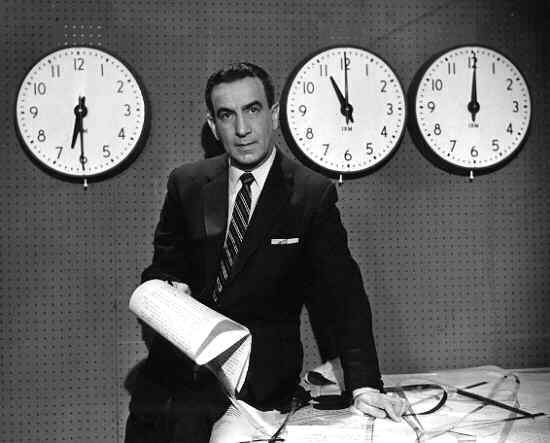 John Facenda: "The Voice of God"


We are very close to the publication – in both paper and electronic forms – of Volume One of Arnold Schnabel’s 73-volume memoir, which shall bear the title Railroad Train to Heaven; in the meantime here is  a second culling of literary bouquets from that volume, ideal for those who  have short attention spans:


A yellow Oldsmobile hissed slowly by, and Steve stood across the street, under his now seemingly repaired umbrella, or perhaps another one. He waved, and then he disappeared, into thin air, or rather into thick rainy air.

It was odd, but just watching her do something so simple as shaking the water off of her umbrella made me want to go to bed with her.

By this time the women were getting back to work on the food. Elektra asked if she could help with anything, but they all said no. Elektra asked again, they said no again. Then one more time around.

I wondered if I could take getting married if it meant listening to all these repetitious verbal rituals, and it occurred to me that I would probably just be a typical man and leave the women to their own arcane devices.

I was afraid this was going to happen, my Aunt Edith’s famous duck’s blood soup. I realized now that they had really gone the whole hog, reverting back to their dark past in a little village in Germany, and that Charlie had brought the duck over still alive. Thank God I had slept through that. I had stood witness once as my aunts killed a duck and then held it upside down to let it bleed into a bowl. It was not an experience I wanted ever to repeat.

John Facenda came on with the news. We watched it for a bit. Some gang in England had robbed a train of £2.6 million.

“When I grow up I’m gonna be a train robber,” said Kevin. “No offense; I know you used to work on the railroad.”

The ladies had also brought out the good china, which I find annoying to eat off of. It’s got all this fancy gilt along its scalloped edges which when you wield your knife and fork upon it makes for an awful scraping noise like desperate mice trapped behind a chalkboard.

Kevin and I sat; for some reason he always sits immediately to my left when we eat. Or is it I who always sits to his right?

It was almost twilight now, the rain had abated to a salty thin spray that seemed not to fall but to shimmer in the air. The air smelled of honeysuckle and gladioli, of wet dirt and the ocean. I sat down in my usual rocker, lit up a Pall Mall, and stared out at the street, covered like a forest floor with gleaming green leaves and fallen brown twigs.

“You don’t understand women. We’re always submitting ourselves to absurd situations. It’s our lot in life.”

The misty rain had stopped, but the light that just a few minutes before had brightly colored the street had now fallen away. A silence fell, or was allowed to resume, but it was still rather windy out, so this was the silence of wet leaves hissing in the trees, of fallen leaves scudding along the street like flotsam in a river, and, from seemingly far away but only a few blocks away, the ocean endlessly crashing at the edge of the continent.

I was having one "first" after another these days, and in my forty-two years this was the first time I had shared an umbrella with a woman who was not my mother. I took the umbrella, it seemed the gentlemanly thing to do, walking on the street side of the pavement, as I had somewhere heard the gentleman was supposed to.

For some reason we hadn’t been talking as we walked; I can’t account for Elektra but for me it seemed redundant and meaningless to add anything to the sound of the rain drumming on the umbrella, the murmuring of the wind.

If I must go into a bar, and apparently sometimes I must, I prefer to slip in quietly, the unknown quiet man quietly drinking his beer or Manhattan. The last thing I need is a bar full of hearty fellows clapping me on the back and asking me how it’s going.

I walked down the windy dark empty street to Congress and turned right, and down the block and a half to the VFW. It’s just a plain long building, dull and brown, it’s windows made out of filmy glass bricks like ice cubes. I opened the door and went in. The first thing I heard was Steve’s distinctive tenor, singing along to a song on the jukebox called “Be My Baby”. And there he was in the middle of the crowded bar, waving a beer mug in time to the music.

As I came out though I saw a woman in a long gown in the dark hallway. Her hair was dark gold.

My immediate thought was, “Oh, great, now it’s the Blessed Mother, this is all I need.”

And I was ready to walk right past her or through her without a word, but she said, “Hello.”

The whole Holy Family had it in for me, or so it seemed. And where was Joseph?

I digress, but after all this is my memoir and no one will ever read it anyway, probably not even its author.


(New and thrilling chapters of Arnold Schnabel's memoirs will return after the publication of Volume One. )