“May I ask who is speaking, please?”

“May I ask who is speaking, please?”
by Horace P. Sternwall

(Go here to read the previous Gwendolyn story; click here to return to the very beginning of the saga.)

Mrs. Dooley was sitting in her rocker with her knitting and listening to Fibber McGee and Molly on the radio, and her son Dan was reading this self-published slim volume of poetry he had bought from that Seamas McSeamas fellow. The book was titled One More Bock for the Road, Me Lads! and the lines Dan had just now read and reread were:

Aye, drink your bock beers swiftly, me lads,
and whatever else yez all fancies!
Just don’t forget your shots of Schenley’s
because sobriety is for pansies!


He closed the book over his finger. He had expected the book to be bad, but somehow it was hard to believe that it could be this appallingly bad. Was it possible that McSeamas actually meant it to be bad? No. As Dan recalled that red bloated face and that constantly shouting voice, he knew that “intentionally bad” would be something McSeamas would never think of attempting; badness came naturally to him, as naturally as his monumental thirst, as naturally as his completely tedious and overbearing personality…

McSeamas was the last sort of person in the world that Dan would normally associate with, but Dan had made his acquaintance, as well as that of dozens of other unsavory and dull reprobates who frequented the bars of the Bowery and Greenwich Village, because it was his job to do so, because –

Mrs. Dooley did not even look up from her knitting. She never answered the phone, even when she was alone in the house.

Dan put down his book, got up and walked to the phone, which was on the wall just inside the kitchen.

“Hello to you,” said a woman’s voice. “Is this Detective Daniel Dooley, please?”

“I do hope you don’t mind my calling you at home.”

“Well,” said Dan, “that depends on what you have to say.”

The voice sounded young, and muffled somehow. It also sounded – how to put it – “cultured” –

“May I ask who is speaking, please?” said Dan.

“Such politeness!” said the voice. “And to think that New York City policemen have a reputation for being ‘rough’ and dare I say uncouth.”

Dan was trying to place the accent, but it was an accent without region, unless that region was the unreal country of Hollywood movies, of cocktail parties in penthouses where the women used cigarette holders and the gentlemen addressed each other as ‘old man’.

“I accept the compliment,” said Dan. “And I hope I won’t seem a typically brusque New York policeman if I ask again who is speaking.”

Dan considered hanging up. But something – he could only call it his cop’s instinct – told him not to.

“My name is –” she said, and she, whoever it was on the other end of the line, paused. For thirty seconds the only sounds Dan heard were those of Fibber McGee and Molly from the living room radio, but then the girlish but cultured voice spoke in his ear: “Mrs. Big.”

Mrs. Big. For almost a month Dan had been trying to find this “Mrs. Big”, on special assignment, and as far as he knew the only other person who knew about his assignment was the man who had given it to him, Captain Callaghan.

Well, someone else obviously knew about the assignment now, and she was on the other end of this line.

“I wonder if we could meet and have a little talk?” said Dan.

“Mrs. Big,” said Dan, “is this phone call meant to frighten me?”

“Oh, dear, no,” said the voice. “I would never stoop so low as to threaten the life of an honest policeman, nor that of his sainted mother.”

“So I don’t need to worry about Molotov cocktails being tossed through the windows.”

“I’m sure I don’t know what you mean? Is a Molotov cocktail anything like a Manhattan cocktail, or a gin fizz?”

“Why did you call me, Mrs. Big?” said Dan. It felt odd calling her that, but what else could he call her? 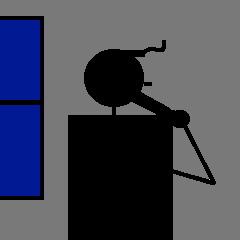 “I called you to tell you that I know you’re looking for me, but if you ‘play ball’ as they say I can steer you to much bigger fish than poor dear Mrs. Big who is only trying to provide for her family by selling a harmless weed which as you well know from your own personal experience only makes people relaxed and happy, if, I must say, occasionally somewhat garrulous and idiotic.”

How did she know that he had such “personal experience”? Oh, wait – he knew. He knew all right, or at least he strongly suspected: it had to be be Dolly – beautiful, rich, foolish – and damnably alluring – Dolly Mainwaring.

Dolly must have blabbed about her policeman friend who liked to smoke gage and go listen to jazz at Jimmy Ryan’s or Eddie Condon’s. Well, damn it, weed was harmless, certainly more harmless than alcohol –

“I mean live and let live,” she said. “Why pick on a poor honest businesswoman trying to sell a harmless product?”

“And your product may or may not be harmless,” said Dan, “but I’m not so sure that you are harmless.”

“I don’t think Jimmy Mazzaro and his four buddies whom you turned into human roman candles would call you harmless.”

“Jimmy Mazzaro was a brutal murdering swine, and whoever turned him and his friends into human roman candles as you say did society a service. Not that I have any idea who it was of course.”

“Oh, how very admirable of you, Detective Dan. But let me just whisper three little words in your ear.”

“Baccini? What about Bart Baccini?”

“Boss of all the rackets from 42nd Street down to the Battery.”

“Boss of all the rackets that is,” said the voice, “except for that of one modest businesswoman selling a few reefers in the Village and the Bowery.”

“Oh, dear, look at the time!” said the voice. “I simply must fly, but it’s been so nice chatting with you, Detective Dan! I do hope we can chat again very soon.”

“Wait a minute,” he said, “what’s this about Baccini?”

“Oh, we’ll chat about that nasty fellow some other time. Ciao, Detective Dan!”

The phone clicked, and all was silence, except for Fibber McGee and Molly in the other room.


Dan sat at the table in the automat, with his empty coffee cup and his day-old New York Federal-Democrat. Once again he hadn’t shaved, and he wore the old overcoat, and threadbare suit, the unpolished brogues, the beat-up fedora – the outfit he had picked up at the Salvation Army for a total of three dollars and a quarter.

Another morning and afternoon wasted – waiting, looking, observing, watching, waiting. Waiting. Waiting for what? Waiting for that break. It would come. It had to come. Or did it? Maybe he was really only waiting for it to be time to go home again, because maybe tonight she would call again.

She had said they would “chat” again, and that was almost a week ago. No, it was only four nights ago, but it felt longer.

Maybe she would call tonight…

Those kids were here again.

Three little girls in their Miss Churchill’s School uniforms, with two boys who were obviously public school kids if they went to school at all, and one older boy, who wore a Falworthy School blazer. Just a bunch of school kids, drinking hot chocolates and eating pie.

Then the kids were putting on their coats, getting up and leaving. They walked past Dan’s table, laughing and chattering the way kids do.

The last one to walk by was the pretty little blonde girl who seemed to be the leader of the group. She was perhaps twelve years old, but small for her age, and she wore a smart blue coat and a matching blue beret. As she passed his table Dan saw something white flutter to the floor, a handkerchief.

He quickly rose from his seat and picked it up, it was a pretty lace-trimmed thing, with a large red “G” embroidered on it.

Her friends were already out the door, but the blonde girl had lagged behind, and she turned, smiling.

“Yes,” said Dan. He held up the handkerchief. “You dropped this I think.”

He went over and handed it to her.

“Thank you ever so much, sir,” she said, and smiling sweetly she stuffed the handkerchief up the sleeve of her pretty blue coat.

She looked at him, smiling. It almost seemed as if she knew him, and Dan in turn had the oddest feeling that he knew her.

Dan watched her as she turned and went out the door, joining her friends on Bedford Street.

I must fly, she said.


(This story appeared in somewhat different form in the October 8, 2014 edition of New Tales of the Hotel St Crispian.)

(Our editorial staff is still busily preparing Volume One of Arnold Schnabel’s Railroad Train to Heaven for publication, but never fear, Arnold will return soon with all-new thrilling adventures! In the mean time, be the first on your block to click here and order our friend rhoda penmarq’s illustrated novel “l’amour, by gabrielle-jeanette perfidy” – a steal at only $3.37 + shipping!)