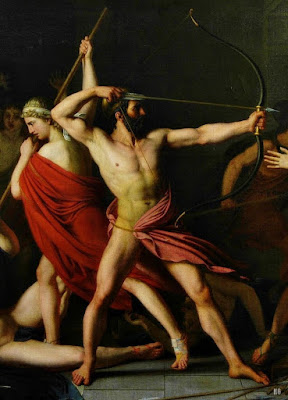 Let’s rejoin our hero Arnold Schnabel here in the pad of his new friend Wiggly Jones, “the little hippie boy”...

(Kindly go here to read last week’s exciting chapter; if you think you might like to go in for the long haul then click here to start at the very beginning of this Gold View Award™-winning 59-volume memoir.)

“To the young people of today I say: ‘Tear yourselves away from your puerile computer games! If you really want to experience adventure vicariously, then dive headfirst forthwith into Arnold Schnabel’s massive and towering chef-d'œuvre!’” – Harold Bloom, in The Gawker Literary Supplement.

“Reality,” said Wiggly, in a way that those authors of the only kinds of books I read might describe as pensive or maybe laden with meaning.

He had finished rolling the reefer, as fat as a big fat man’s little finger, and now he put out his tongue and lightly licked the reefer along its length a few times, turning it as he did so. Then he put one end of the reefer between his lips and picked up a table lighter from out of the piles of books and magazines and other odds and ends too numerous to list on the coffee table. The lighter was shaped like a smiling Buddha, or rather the lighter mechanism was on the Buddha’s lap, as if he were holding it there. Anyway, no matter, Wiggly clicked the lighter into flame and lit his reefer, taking what I now considered his usual big drag. Then without exhaling he took another drag, again a big one. And then, I don’t know why, maybe he felt that smoking marijuana increased his ability to talk nonsense with a madman, he took yet another big drag, and he held all three drags in while he proffered the reefer to me.

I took the reefer, but I suddenly became aware that I already was extremely under the influence of marijuana, on top of the big shot of mezcal I had just drunk and the good healthy gulp of Tree Frog ale, on top of everything else, like for instance being marooned in yet another outlandish fictional world. But I took a moderate drag anyway; I didn’t want to seem impolite or ungrateful, especially to someone who might well have just saved my life.

Wiggly exhaled an enormous cloud of reefer smoke my way.

“Y’know, Arnold,” he said, “it’s funny, because I always considered this dimension to be reality.”

I exhaled my own modest lungful of smoke.

“I’ll admit that all this –” I said, waving my hand in a half-hearted way – “certainly seems, uh, realistic.”

“That’s what I’ve always thought,” said Wiggly. “So, dig, tell me about this ‘reality’ you come from, man.”

He held out his hand, and I realized I was still holding on to the reefer. I gave it back to him, he took another drag, and held it in.

He sure liked his reefer, but who was I to be critical of anyone else?

“Your reality, man. The dimension you come from. What’s it like?”

“And so how is it different from this dimension?”

“If I answer that,” I said, after a brief pause which Wiggly made use of by taking another drag of his reefer, “you may find the answer disturbing, Wiggly.”

Wiggly exhaled a fresh warm lungful of smoke in my face, some of which I’m sure made its way into my own lungs.

“Take another toke on this doobie and try me.”

He held out the aforementioned “doobie” and I took it, I don’t know why, nor why I took a good-sized drag off of it.

“In a nutshell, Wiggly,” I said, after exhaling a cloud of my own broken dreams, “this is a fictional world.”

“Right,” I said. “It’s the world of a novel called The Ace of Death, by Horace P. Sternwall.”

I picked up the Jolly Six Bums paperback, holding it so that Wiggly could see the cover.

“The Jolly Six Bums – I don’t think I’ve read that one yet. I read so many books.”

“That’s so weird, man.” I was hogging the reefer again, so Wiggly reached over the table and took it from my fingers. “And, like, how did you get into this fictional world?”

“Well,” I said, “it’s all a pretty long story, really, but I was in another fictional universe, and this friend of mine named Big Ben Blagwell –”

“The hero of Set Sail for Tortuga! by Horace P. Sternwall?”

“And what’s that other one, They Call Her Bangkok Betty, also by Horace P. Sternwall?”

“Or Sapphic Sisters of the Sulu Sea? That was this one where Ben gets taken prisoner by these lesbian pirates, and –”

“So you actually know this Big Ben Blagwell?”

“Yes,” I said. “I guess you could say we’re friends. Anyway, we were at this bar, and Ben started to read aloud from Horace’s book –”

“And who were they?”

“More friends of yours?”

“Well, sort of. One is more like an acquaintance, really –”

“Not Mr. Philpot the bookseller?”

“Of course! What a crazy old dude! So, like, he’s fictional too?”

“I forget what I was saying.”

“You were saying how you got into this dimension.”

“Okay, one was the son of God, except now he’s become a human being again, and he goes by the name of Josh.”

“Cool. Very cool. And who else was there?”

“I promise not to laugh at you, dude.”

“The other person there was a talking fly, named Ferdinand.”

“I know this is all a little hard to believe,” I said.

“Sure, man, so, go on, how did you make the scene into this dimension, daddy?”

“Okay. Well, as I say, Ben started to read from this book –”

“Yeah,” I said, “um, okay, so Ben started reading the beginning of the book out loud, and next thing I knew I was in the book. I was in that alley down there, being threatened by those three hoods.”

“Uh-huh. That must have been a mind fuck.”

“Well, these things happen to me,” I said. “I – I fall into fictional universes, and it’s, well, it’s hard to get out of them. I know it sounds odd.”

“My name is Arnold actually.”

“It makes sense because if this whole world is fiction then like anything can happen. Which like explains why everything has happened.”

“Why else would everything be so weird, man?”

“But my world is weird also,” I said.

“Yeah. Okay. That means your world is probably fictional, too, dude.”

I held out my hand.

Wiggly ran his open hand over my open hand.

“The union of our two fictional worlds, Harold. But, like, who is the hero?”

“Who’s the main character, the, like, protagonist, the hero – wait, your name’s not Harold, is it?”

“Who’s the hero of the book we’re in, the world we’re in, this fictional universe we’re in? Who’s the like main character, man?”

We had been passing the reefer back and forth through all this, and now it was considerably shorter than it had been when Wiggly rolled it. It was in my fingers now, and I took a drag before answering Wiggly’s question.

“I like to think that I am the main character of my life,” I said, “if not the hero.”

“Well, that’s the thing, man, isn’t it?” said Wiggly, and he took what was left of the reefer from my hand.

Wiggly took his customary deep drag off the nubbin of reefer, held it in for a good thirty seconds, and then exhaled a great roiling fog bank of fragrant smoke my way before continuing.

“Isn’t everybody the hero of their own life?” he said.

(Continued here, and onward, until every remaining one of those hundreds of marble copybooks filled with Arnold’s small but neat handwriting has been transcribed, with only the most obvious chirographic and spelling errors silently corrected)

(Please scroll down the right hand column of this page to find a more usually than not current listing of links to all other officially-available episodes of Arnold Schnabel’s Railroad Train to Heaven©. Kindly click here to order the handsome new illustrated  paperback edition of our esteemed colleague rhoda penmarq’s poems for everyone by wiggly jones, “the little hippie boy” – on sale now for a laughably cheap $2.13 plus shipping!)