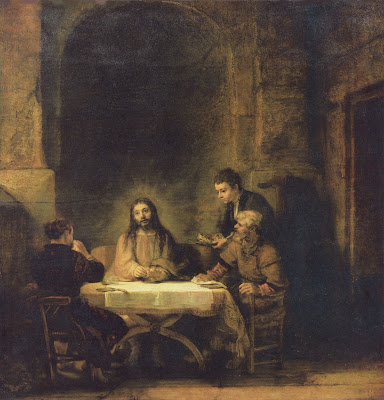 Let’s rejoin our hero Arnold Schnabel and his friends Josh (the son of God), Big Ben Blagwell (that nautical adventurer) and Ferdinand (the loquacious fly) here in the entrance area outside Bob’s Bowery Bar, on this fateful rainy night in August of 1957…

“Little did Arnold Schnabel know, as he filled up those hundreds of marble composition books with his small but neat Palmer Method handwriting (with his instrument of choice, a common cheap Bic ballpoint pen), that he was creating the single greatest masterpiece in the American literary canon.” – Harold Bloom, in The Cape May Star & Wave Literary Supplement.

“I’m not prejudiced,” said Josh, after another pause. “I mean I know these unfortunate women are just trying to earn a living –”

“What do you mean, ‘unfortunate’,” said Ben.

“Yeah, what’re you trying to get at, Josh?” said Ferdinand. He had flown off the rim of Ben’s schooner and now hovered in the curling pale ribbon of smoke drifting up from Ben’s Sweet Caporal.

“Well," said Josh, "it’s just that I think that most women would prefer not to be prostitutes if there were some other way that they could, you know, earn a living –”

“Like what, slinging hash in some greasy spoon?” said Ferdinand.

“Yeah, or sweating over a sewing machine in one of them sweatshops,” said Ben. “My mom had to work in a sweatshop after she got too old to be a prostitute, and she hated it.”

“Or how’d you like to be a housewife in one of these stinking tenements around here?” said Ferdinand, “with a pack of screaming kids and a slob of a husband who comes home drunk and beats the living shit out of you?”

“Yes, that would be unfortunate,” said Josh.

“So let’s give the whores a break,” said Ben. “They’re just doing their best, like everybody else. And I ain’t just saying that because my own mom God rest her soul was a whore before she got too old and had to go to work in the sweatshop.”

“You’re right,” said Josh. “I shouldn’t be judgmental. But still, I just don’t know if I could, you know –”

“I just don’t know if I could go with a prostitute,” said Josh. “Especially, for my, you know – my first time.”

“Yeah,” said Ferdinand. “Your what time?”

“My first time with a woman,” said Josh.

“What about a girl?” said Ben.

“What about,” said Ben, “and, please, bear in mind, I myself am far from judgmental in these matters, but what about with a geezer?”

“What about a man, he means,” said Ferdinand. “He wants to know if you ever had sexual relations with a man.”

“Or a boy,” said Ben. “Again, Josh, we are not judgmental, and you can be honest with us.”

“Who are we to be judgmental,” said Ferdinand.

“Okay, so let me get this straight,” said Ben. He took another drink from his schooner of black liquid before continuing. “You’re telling us you never had a roll in the rack with a woman or a girl or a man or a boy.”

“That is correct,” said Josh.

“Okay,” said Ben. “Now, again, please believe me when I say I am not judging, and I believe Ferdy here ain’t judging either, are you, Ferdy?”

“Judging is the last thing I am,” said Ferdinand.

As usual I was only barely paying attention to a conversation that did not directly involve me, and so I said, “Pardon me?”

“I’m asking if you’re judging,” said Ben.   “Oh, God, no,” I hastened to say. And then remembering who Josh was or at least used to be I added, “Excuse me, Josh.”

“Quite all right,” he said.

“So, Josh,” said Ben, ”I’m only gonna ask you this once, and you don’t have to answer if you don’t want to, but what about animals.”

“You’re asking me if I’ve had sexual relations with animals?”

“No one’s judging you if you have,” said Ben.

“Ben,” said Ferdinand, “give the guy a break, he just said he’s never made the beast with two backs with neither man nor woman nor beast, so let it go, Christ’s sake. Oh, ‘scuse me, Josh, for saying Christ’s sake I mean –”

Ben raised his schooner and took another drink of his dark beer, I assumed it was dark beer, for all I knew it was some other sort of concoction, fermented squid ink or betel nuts, the only thing I was pretty sure of was that it contained alcohol. He sighed and took a drag of his Sweet Caporal, and Ferdinand drifted down into the schooner to have a drink himself.

Ben gazed out at the rain, and it was almost as if I could hear the wheels turning in his brain, as if he were a very lifelike robot presented with a puzzling proposition. He turned to look at Josh again.

“You’re telling me you’re a virgin,” he said.

Another pause fell over the conversation, and the only sounds to be heard were that of the crashing rain and the much softer and gentle sound of Ferdinand lapping up that inky beverage.

“Well, you understand,” said Josh, “that this is all pretty new to me, you know, being human.”

Ferdinand flew up to sit on the rim of Ben’s schooner again.

“What about the last time?” he said.

“Your last time around in this crazy rodeo we call the world.”

“The last time I walked the earth as a man?”

“Yeah,” said Ferdinand. “I mean, you know, you must have gotten some action back then, right?”

“Well, no,” said Josh. “As I was just saying to Arnold, all this talk you hear about Mary Magdalene, or even John the Apostle, well –”

“So you’re trying to tell us you never been laid,” said Ferdinand. “Like ever.”

“Well, then, you agree we got to do something, right?” said Ben.

“What do you mean?” I said, although I knew what he meant.

“I thought you were Josh’s friend,” said Ben.

“Then maybe he ought to start acting like a friend,” said Ferdinand.

Josh turned to me.

“Do you think they’re right, Arnold? Do I need to, in their parlance, get laid?”

“If he wants to call himself a man,” said Ferdinand.

“A man’s got a johnson for a reason,” said Ben.

“Which you just now so admirably did, Josh,” said Ferdinand.

“It was indeed quite enjoyable,” said Josh.

“You think pissing was enjoyable,” said Ben. “You just wait till you try fucking. Pardon my language.”

“Well,” said Josh, “the thing is, I really just don’t feel comfortable with going with a prostitute.”

Ben sighed, looked out at the rain.   He turned to look at Josh again.

“All right, tough guy. Have it your way. Luckily for you you’re a good looking fella, well dressed, clean, well spoken. So maybe we can fix you up so’s you won’t have to pay for it.”

“But listen, Josh,” said Ben, “if we do hook you up with a nice girl, and if she does let you make whoopee with her, let me just say one thing.”

“If she seems like she wants a few bucks afterward, you know, hinting around like, clearing her throat and lingering after she’s gotten dressed, running the toe of her shoe side to side on the floor – lookit, just give her a little something, okay?”

“But you gotta be careful how you do it,” said Ferdinand.

“Right,” said Ben. “You don’t want to hurt her feelings.”

“Just say, like, ‘Oh, here’s a little something for cab fare,’” said Ferdinand.

“I ain’t saying that’s what you should do.”

“Me too,” said Ferdinand.

“A fin,” said Ben. “A sawbuck. If the gal was really nice, make it a double sawbuck.”

Ben had smoked his Sweet Caporal down to a nub of glowing redness. He gazed at the butt, as if fondly and sadly, then without further ceremony he flicked it out into that crashing rain.


(Continued here, and for only Josh knows how long at this point.)

(Kindly look to the right-hand column of this page to find what one hopes is an up-to-date listing of links to all other legally released chapters of Arnold Schnabel’s Railroad Train to Heaven©. Coming later this year: Volume One of Arnold’s memoirs in e-book {and maybe paper-book} form!)

I hope they don't forget to mention condoms.

Oh, heck! Real trouble might be on the way!