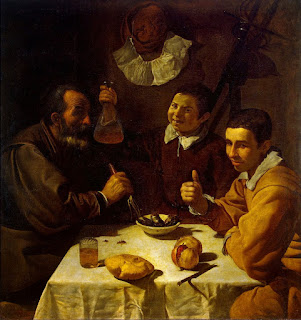 Let’s rejoin our hero Arnold Schnabel and his good friend “Josh” (better known as the son of God) here in the entrance area just outside of Bob’s Bowery Bar, on this rainy night in August of 1957…

Now it was Josh’s turn to sigh, something I had never noticed him doing before.

He stared out at the rain.

He took his cigarette case out of the side pocket of his suit jacket, but he didn’t open it, not yet.

From inside the open doorway of the bar the drunks continued to laugh and shout, and the band continued to play, the singer singing what sounded like a different song now:


Let’s dance the boogaloo, daddy,
and the black bottom too.
Let’s rock this crazy joint, daddy,
like we don’t know what to do...

Finally, after a very long minute Josh turned his head and looked at me.

I couldn’t deny it.

He was looking at me as if he were waiting for some sort of verbal response, and so I said:

“Yes, but –” and then I stopped, as usual searching and failing to find the right words, or words less wrong.

“Sometimes it’s not so bad.”

“Okay, but what about the starving children in Africa?” he said. “For that matter what about those living in squalor and desolation right here on the Bowery?”

“How can you be happy when others are in pain?”

Again he seemed to want some sort of answer, and so I considered the question for the customary allotment of three seconds.

“Most people don’t think about other people’s pain, Josh.”

He stared at me with those bottomless blue eyes of his for what must have been another three seconds before he spoke again.

“Yes, I suppose you’re right,” he said. “Too busy dealing with their own pain, or trying to avoid pain.”

He clicked open that gold or probably at least gold-plated cigarette case, and looked into it, but he didn’t take one.

“I beg your pardon,” was all I could think of to say.

“The holy trinity,” I said, proving I was paying attention.

“In what sense?” I asked, cautiously.

“No, it’s not just that,” he said. “It’s because you’re my friend. But even so why am I asking you? You’re a human being, you can’t know the answer.”

“Why did we create human beings just so they could suffer?”

“Well,” I said, “I think that, you know, theologians have, uh, you know, grappled with that question –”

“What the fuck do they know about it.”

I couldn’t remember ever hearing him say fuck before. I knew now he must be really upset.

“Don’t beat yourself up about it, Josh,” was all I could think of to say.

“You want to know the truth, Arnold?”

“My father, and the other fellow, you know –”

“H.G. Yes. We were bored, so we created the universe, and the earth, and, a few million years or so later, human beings.”

“We really fucked up. And now, I wanted to be human again, and not because of any of this redeeming mankind business, but just because I wanted to – to live, and, and –”

He finally took a cigarette out of his case, clicked it shut. He tapped the cigarette on the lid of the case a few times, then dropped the case back into his jacket pocket.

He didn’t light the cigarette yet, though. He pointed its tip at me.

“For a human being it’s not unusual,” I said.

He put the cigarette in his mouth, but then he took it out again.

“It really hurts,” he said. “Knowing that Carlotta is in love with you and not me. And knowing that you had sex with her – wow, that really, really – really –”

“That really hurts. Knowing that. That you had sex with her –”

“And, again, I’m not accusing you, Arnold. I don’t hold you to blame. It’s just one of those things.”

“And you don’t even care about her –”

“So you do care about her?”

“But you’re not in love with her.”

“Oh, no,” I said, and as soon as I said that it felt as if I had spoken perhaps a bit too emphatically, so I quickly added a “but –” and then couldn’t think of anything else to say.

“So she cried some more.”

“Carlotta. After she told me she was in love with you she cried some more. Then she fell asleep. She was pretty drunk I guess. So I just laid a sheet over her, and, you know, sort of crept out. And now, here we are. And I feel really depressed.”

“It’s just all part of life, Josh,” I said. “You’ll probably meet some other nice girl.”

“Perhaps in time the pain will lessen.”

“There you go again.”

“I certainly hope so. Because right now I sort of feel like running in front of the very next bus that comes by.”

I knew I could not argue with him on that point.

“How do you deal with the pain?” he said.

“You just hope it will end eventually,” I said.

“And in the meantime you just suffer, is that it?”

Again, I was not about to argue.

He took out his lighter, that nice gold, or at least gold-plated I would presume, lighter. He put the cigarette he’d been holding in his lips, and he raised the lighter up to it, and thumbed its cap open, but then he lowered the lighter again.

He took the cigarette out of his mouth.

“I can’t stop thinking about you having sex with her,” he said. “With Carlotta. Was it just the one time?”

“As far as I know, yes,” I said. “Again, that all happened before I entered this universe –”

“I know,” he said. “I know, and, again, I’m not blaming you, Arnold. But I just keep getting this mental image of you, on top of her, naked, thrusting –”

“You have to try not to think about it.”

“But how? How can I not think about it? It was bad enough knowing she was in love with you, but now to realize that you, you performed the act of, of –”

“Maybe, and I would normally never say this to anyone, but maybe you’d be better off just having a few more drinks, you know? We could go inside, join the others, listen to the music –”

“Drink my troubles away then.”

“And what about when I sober up, then what do I do? Start drinking again?”

“You’re really not being very helpful,” he said.

“There’s probably nothing I can really do to help, but at least I can try not to make things worse.”

“I don’t know how you could make things worse.”

“I could say that the pain will only grow worse and worse, and that there’s no hope.”

“That would be an extremely depressing prospect.”

“Yes,” I said. “But probably the pain will grow less and less, so there is some hope.”

“Until my heart gets broken again.”

“I suppose it’s inevitable,” he said. “Heartbreak. Sadness. The death of loved ones. One’s own death.”

“Why did I ever want to be human?”

He didn’t say anything for a half a minute, and then he put the cigarette in his mouth again.

He clicked the lighter into flame, but then, instead of lighting his cigarette, he raised his free hand, his left hand, and brought it up very slowly so that its open palm was a few inches above the flame.

Then he lowered his palm down into the flame.

His shoulders flinched, he pulled his hand away and shook it in the air.

He clicked the lighter shut and with two fingers of the same hand he took the unlit cigarette from his mouth.

He was still waving his left hand in the air.

“Hold it under the rain,” I suggested. “The burn. Stick your hand out and hold your palm up to the rain.”

“It’ll make it feel better,” I said. “At least temporarily.”

He turned to face the street, extended his arm out from under the ceiling of the entranceway, and held the palm of his hand up to that crashing rain.

I stood there watching him.

What else could I do?

“Wow,” he said, after a minute. “That really does make it feel better.”

He stood there like that. Holding his palm out to be splattered by that relentless rain.

One more time he put the cigarette in his mouth, he clicked the lighter open and gave himself a light.

He snapped the lighter shut and dropped it back into his jacket pocket.

With the same hand he took the cigarette from his mouth and then slowly exhaled a great cloud of Pall Mall smoke into the rain, which washed it away at once from the air.

“You know what this means,” he said, still holding his hand out in the rain, looking back at me over his shoulder, under that cocked straw trilby hat of his.

“What does what mean?” I said.

“The fact that I’m capable of feeling pain. Both moral and physical. You know what that means don’t you, Arnold?”


(Continued here, and onward, boldly going where no man or beast has willingly gone before.)

(Please turn to the right-hand column of this page to find what one hopes to be an up-to-date listing of links to all other legally-released episodes of Arnold Schnabel’s Railroad Train to Heaven©. Coming sometime this year: Book One of Arnold’s saga in e-book form, and possibly even in the form of a book made out of paper!)

Honorable, really, Josh's desire to be just another struggling person, wanting some fun, struggling with pain. Especially because, unlike his Father and the Other Guy, as Josh calls him, He's been through this before. Different time and place might make all the difference.

Let's hope this incarnation doesn't end as badly as the last one!