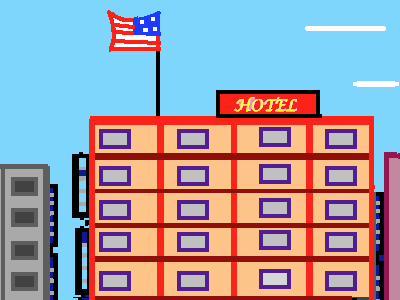 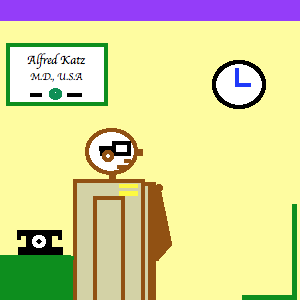 “Well, the results of your physical seem to show that you’re in pretty good shape. A trifle underweight maybe.”

“I don’t really like to eat too much, Doc. You know why?”

“Elevator operator, sir. Hotel St Crispian. You ever stop there?”

Mortimer waited patiently for the doctor to reply, and after a half a minute the doctor did reply.

“‘Cause I woulda remembered you, Doc,” said Mortimer. “That’s why. Because like a steel trap my mind is. I remember every person ever stepped into my elevator.”

“Every goddam one, sir, doctor, captain – what you want me to call you?”

“You can call me Captain Katz, Mortimer.”

“That’s what I figured, Doc. Captain. Sir. There ain’t many people get in and out of that hotel I don’t know about. I ain’t saying there ain’t been nobody but I am saying they been few and far between. And I ain’t just blowing my own horn here. You ask anybody. You ask Raoul, you ask Roland, you ask Mr. Bernstein, you ask Mr. Nolan.”

“You ask Mr. Brown. You ask Miss Charlton. Go ahead, ask them, I got nothing to hide.”

“Okay. Well. If I may ask you a few questions, Mortimer.”

“Ask away, Doc. I mean Captain. I got nothing to hide. An open book am I.”

“Well, it says here that you’re requested a deferment from the draft.”

“That is correct, your honor.”

“That is correct, Captain.”

“And the reason you give is ‘war work’?”

“That is also correct, Captain, sir.”

“But – your work is operating a hotel elevator?”

“I can see you have been paying attention, sir. Taking notes. That’s good.”

“Well, okay. May I just ask you this, Mortimer: how is it that you consider operating a hotel elevator to be ‘war work’?”

“You really want to know, Doc?”

“This is just between you and me and the walls of this office, right?”

“This is confidential, yes, Mortimer.”

“That’s right, sir. Them fifth columnists. They come in sometimes. You can’t keep ‘em out. It ain’t the hotel’s fault. They look like anybody else. Like you. Like me. Well, maybe not like me, but some of ‘em look like you. Some of them.”

“That is right, your honor. You know what a fifth columnist is, right?”

“Well, a fifth columnist is someone who is secretly working for one of our country’s enemies.”

“That is correct, sir. Bingo. I see you have done your homework.”

“But, Mortimer, I still don’t quite see what your ‘war work’ consists of.”

“My job, sir, is to keep an eye out for these fivers.”

“That is correct, your honor. I keep an eye out for the fivers, and when I spy them I make a mental note of it.”

“I don’t write nothing down, Captain, sir. It’s all in here.” Mortimer tapped the side of his skull. “In here. The steel trap.”

“So what you’re saying is – and, please, correct me if I’m wrong, Mortimer – is that in your work as a hotel elevator operator you’re able to, shall we say, spy on our country’s enemies? And that this is your ‘war work’?”

“That is correct, sir. This is why I need you to give me an exemption from the draft. Hey, I am more than willing to go into the army. More than willing. But answer me this, your honor: I goes into the army, then who’s gonna keep an eye out for fivers what check into the St Crispian? Who? Jackson? Jackson wouldn’t know a fiver from a fruitcake. Julius? Hey, don’t get me wrong, Julius is a good man, he taught me everything I know about operating an elevator, but, all due respect, Julius is getting old. Thirty-five years he’s been on the job, and you ask me he’s lost his edge. So. Let me ask you something, your honor. I ask you this: I go in the army, who they gonna get to replace me? Some kid what don’t know nothing, or else some old guy don’t even know that much? Who they gonna get to spot the fivers?”

Again Mortimer paused, waiting for an answer. When the doctor said nothing Mortimer asked his question again.

“They gonna get nobody, that’s who, your honor. And then next thing you know that hotel is a hotbed of fivers.”

“Possibly, sir. Possibly Germans and Nazis. But they ain’t what I’m worried about.”

“No, sir. It ain’t the Nazis that we got to worry about.”

“It’s the people from out there.”

“It’s them people who fly in from the other dimension. Dimension X.”

“That is correct, your honor. I first read about Dimension X in a magazine in this article written by a personal friend of mine lives at the hotel, fella name of Fred Flynn. You ever hear of him?”

“Flynn. Fred Flynn. He wrote this magazine article, left it on one of them coffee tables in the lobby. ‘Invaders from Dimension X’ was the name of the article. And it was all about these fivers from this other dimension come to New York to take over.”

“My job, your honor, the way I see it, is keep an eye out for these fivers, from Dimension X.”

“Keep an eye out for them.”

“Keep an eye out for ‘em, keep an eye on ‘em. And if I hear they’re up to something I will report it to the proper authorities. In my case I guess that would be Mr. Nolan.”

Captain Katz said nothing for a long moment. There was a packet of Old Golds on his desk. He picked up the cigarettes, took one out, tapped it several times on the desk, and then lit it with the Zippo lighter that had been sitting on the desk next to the cigarettes. 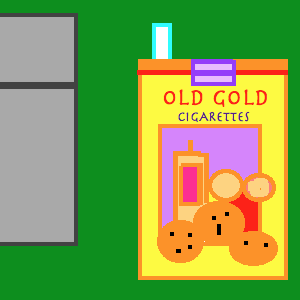 “Well,” said Mr. Brown, “I hear you had an appointment at the draft board today, Mortimer.”

Mortimer pulled his lever that closed the cast-iron grillwork doors of the elevator.

“No, sir, thank God that will not be the case, on account of I got a deferment, sir.”

“Oh, really, Mortimer? What is it? Flat feet? Heart murmur?”

“So why the deferment?”

“War work, Mr. Brown. More than that I ain’t at liberty to say. Usual floor, sir?”

Mortimer pulled the lever that started the car, with its usual sudden lurch.

They rode in silence up to Mr. Brown’s floor, the seventh, and Mortimer opened the elevator doors.

Mr. Brown stepped out of the car.

“You see anything unusual around the hotel, anything at all, especially if I ain’t on duty at the time, I want you to feel free to tell me about it.”

“Anything at all, Mr. Brown. Feel free to come to me.”

Mr. Brown had nothing to say to this, or at least nothing he could say at the moment.

Mortimer pulled the big lever that closed the elevator’s doors. 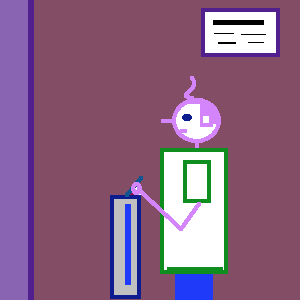 
(This is a slightly revised version of a story originally published in a more luxuriously-illustrated form in New Tales of the Hotel St Crispian. We will return next week with an all-new and thrilling chapter of Arnold Schnabel’s Railroad Train to Heaven™!)
Posted by Dan Leo at 9:32:00 PM