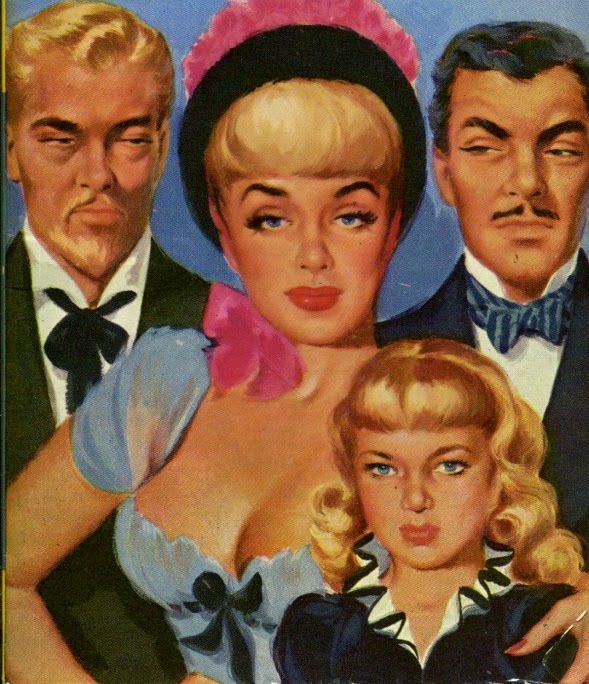 “Would you like me to have Mortimer check on you, darling?” said Auntie Margaret.

“I don’t think that will be necessary, Auntie,” said Gwendolyn.

“If you want anything to eat, just call room service.”

“We really should dash, dear Margaret,” said Serge. “Tommy Sullivan don’t like to be kept waiting.”

“Tommy Sullivan will wait quite as long as he has to,” said Auntie Margaret.

Auntie bent down and put her face next to Gwendolyn’s, and made a brief kissing movement with her luscious red lips.

Then she straightened up and turned to Serge and Pierre, who were standing there by the open door, both of them smoking cigarettes.

“Indeed she is,” said Serge. “Do you want us to bring anything back for you, ma p’tite ange?”

“Nothing, thank you,” said Gwendolyn.

The three of them filed out, Serge closed the door, and at last they were gone.

Gwendolyn waited five minutes, just to make sure they were clear of the lobby, then she took Auntie’s pink angora shawl off the dresser and Auntie’s pink leather purse and Jane Eyre and went out the door herself.

“Lobby it is,” he said. He closed the grill-work doors of the elevator, pulled his great lever, and the cage began its slow and jolting descent.

They were almost to the second floor when suddenly Mortimer pulled his lever again and stopped the elevator with a jolt, but then he always stopped it with a jolt, just not usually between floors.

“Hey, wait a minute, missy,” he said. “Your Aunt Margaret just told me to keep an eye on you, and to make sure you didn’t get into any mischief.”

“I’m only going down to the lobby to read my book.” She held up the book for him to see. “See? Jane Eyre. Did you ever read it?”

“No, I gotta say I never did,” said Mortimer. “I did however see the movie with Mr. Orson Welles and Miss Joan Fontaine.”

“The book is ever so much better.”

“I don’t really have a whole lotta time for reading books,” said Mortimer.

“You should read it, Mortimer. It’s ever so good.”

“Can you please start the car again now and take me down?”

“She told me I could go down to the lobby.”

“Well, okay, then. You promise you won’t run out onto the avenue or nothing?”

“Why ever would I want to run out into the avenue?”

“How do I know? I don’t know what little girls like to do.”

“Oh, all right. But just promise me you’ll stay in the lobby.”

He pulled his lever once again and the car lurched and started again to descend.

Men, thought Gwendolyn. They really were just puppets to be bent to a woman’s will, just as Auntie Margaret said.

Once out in the lobby Gwendolyn immediately went over to where old Mr. Blythe sat in his usual place at one end of the faded old divan, next to the enormous rubber plant, which, like Mr. Blythe, seemed perpetually on the verge of death.

Mr. Blythe paused before answering. He paused so long that Gwendolyn started to wonder if he was going to reply to her polite question at all.

But finally he spoke.

“I am not in pain. And I’m still alive. At my age this is the best one can hope for.”

“Would you mind if I sat next to you and read my book?”

Gwendolyn climbed onto the divan next to Mr. Blythe, to his right. On the small table to Mr. Blythe’s left was a glass half full of Mr. Blythe’s usual sherry and a cut-glass ashtray in which sat his usual rather large Cuban cigar, one-third smoked.

“I can read aloud for you if you like, Mr. Blythe,” said Gwendolyn.

“No, that’s all right, thank you very much, Gertrude.”

He went into one of his long pauses, or maybe it wasn’t a pause, maybe he had said all he was going to say for the time being.

She had just opened her book to her place though when he did speak.

“I’ve read so many books you see, Gertrude. Thousands of books. They teem and swirl about in my brain, mixed in with all the thousands of people I’ve met, the millions of moments I’ve lived. All of it. All of it. It almost seems redundant to read at this point in my life.”

Soon, Gwendolyn knew, he would fall asleep, and that was when she would make her move.

She had lifted a five-spot the last time, and a tenner the time before. Tonight with any luck she would find a double sawbuck in his wallet, or, failing that, in his vest pocket, or one of the side pockets of his suit coat. The old fellow was always practically bristling with greenbacks, and he obviously had more of them than he knew what to do with.

Auntie Margaret always told her a girl had to look out for herself.

(Originally published in somewhat different form and with profuse illustrations by rhoda penmarq in "Tales of the Hotel St Crispian".)

(We will be back next week with a brand new chapter of Arnold Schnabel’s Railroad Train to Heaven™!) 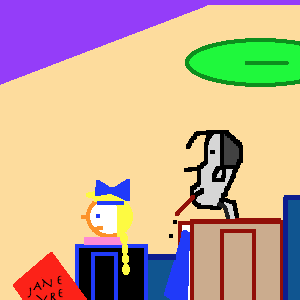