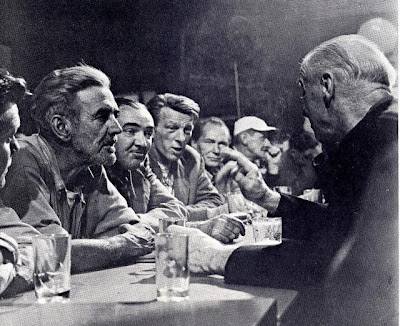 As a special holiday treat for the fans of Arnold Schnabel’s Railroad Train to Heaven, we present today a never-before-published poem by Schnabel, only recently discovered in a cardboard box under a stack of copies of The Catholic Standard and Times in the basement of the house formerly owned by Arnold’s mother at B and Nedro, in the Olney section of Philadelphia, right across the street from where the Heintz metalworks factory used to be before it was demolished and turned into a shopping mall. This is one of the very few poems of Schnabel’s to exist only in his holograph — written, as was his custom, with a Bic pen in a black-and-white marble copybook. The poem is undated, but carbon dating of the paper indicates that the poem was probably written sometime during his stay at the Philadelphia State Hospital at Byberry in early 1963, following his complete mental collapse in January of that year. The poem is probably unfinished, lacking as it does the formal perfection of the great bulk of poems that Schnabel published on a weekly basis for some thirty years in his neighborhood paper, The Olney Times, but nonetheless we feel it worthy of sharing with his many readers, even if he chose — undoubtedly for his own good reasons — not to submit it for publication.

It’s the eve of Christmas Eve,
the cold wind licks their faces,
the snowflakes find their way into
the collars of necks whose scarves
have been left in the sawdust of the
barroom floor.

A shortcut is taken through Fisher Park,
but the scrubby grass is slick and wet;
a fall is taken down Dead Man’s Hill
where the children love to sled
on their Flexible Flyers:
down, down he tumbles, down and down,
until finally he lands at the bottom,
in the slush and jagged ice,
where, in pain,
which means at least not dead,
not yet, he lies on his back,
howling at the universe,
the snow rushing down
heedlessly into his face,
and somewhere among the rowhomes
on Nedro Avenue, a dog replies,
howling also, and then another on
Sixth Street, and yet another on Spencer,
and soon a whole chorus of dogs join in,
drowning out the screams of the human,
or of what once was human.

Yes, it’s Christmas,
for God and man and dog,
for those who are heaven bound
and for those forever banned
from paradise.
This is Christmas,
Christmas among the damned.


And now a cheering word from Miss Ruby Murray!

And a non-damnable Christmas to you two, too!

We lost our connection before I'd thoroughly appreciated Arnold's poem.
His Christmas poem (I always love Arnold's poetry) certainly foreshadows his life during Sept. 2012, if I've got the right season.

Thanks, Kathleen. It had been quite a while since we'd seen a "new" Arnold poem.