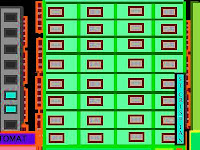 
nolan returned to a chair in the lobby. not his usual one by the front door, but one in front of the coffee shop, that gave him a better view of the elevator. he was still curious about miss wilde's gentleman caller, although jake's reappearance and bernstein's acceptance of his story gave him no reason to pursue the matter. less than no reason, as miss wilde was just about the hotel's most "valued" and pampered guest. the gentleman caller was almost certainly long gone, but you never knew. some likely looking character might pop out of the elevator and it would be something he could scratch off his mental list.