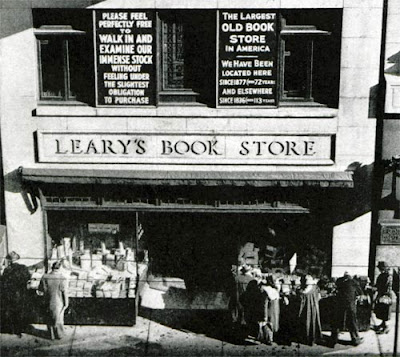 This newly unearthed Arnold Schnabel sonnet was originally published in the poet's local neighborhood paper The Olney Times, dated May 11, 1963, a mere month or so after Schnabel’s release from the Philadelphia State Mental Hospital at Byberry, to which he had been committed in January of that year after suffering a complete mental breakdown. At the time of this poem’s composition Schnabel had been given disability leave from his longtime job as a brakeman for the Reading Railroad, and had nothing but free time on his hands…

The “47” was the trolley Arnold would have taken to go downtown, probably boarding it at Fifth and Nedro, and, in this case, disembarking at Eighth and Market Streets.

Leary’s Book Store (now sadly gone these past thirty-three years), was housed in an ancient four-story building on Ninth Street below Market, just across the street from the post office and separated by a cobblestoned alleyway (jammed with second-hand book stalls) from the mammoth hulk of the Gimbels department store. At the time of its closing, Leary’s -- with its cage-like elevator its curious pneumatic-tube system, and its whispering, spectral clerks -- was famous as the “oldest book store in the United States.” Among the many valuable and previously unknown documents discovered in the final cataloguing of its wares was an original John Dunlop broadside of the Declaration of Independence of the United States of America.

One must do something with one’s time, and so
On this fine spring morning bright and early
I hop on the 47 and go
Downtown, and into the hurly-burly;

Thousands of people pass by willfully
But the spectacle does not cheer me,
And so I go forthwith to Leary’s.
Here at last all is calm, still, and silent.

Two hours later, down in the basement,
At last I discover a just barely
Worn “Ace Double”: Shirley From Sheboygan/

Female Residence, marked down to a dime:
This will do. This will last me till this time
Tomorrow, when I’ll be back here again. 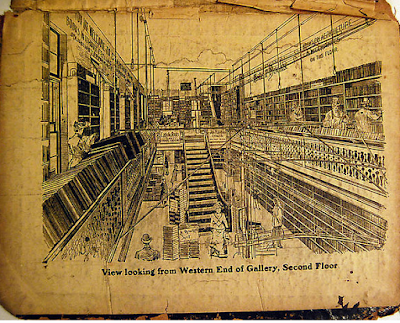