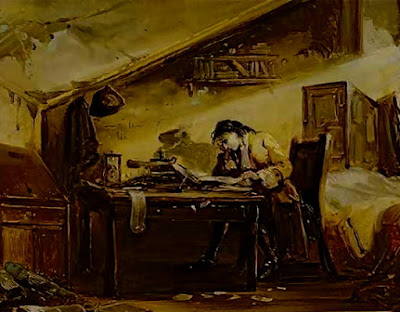 Let’s rejoin our hero Arnold Schnabel and his friends in Arnold’s humble attic room in his aunts’ old and weatherbeaten guest house, here in the quaint seaside resort of Cape May on this hot and humid Sunday afternoon in August of 1963...

(Click here to read our previous episode; the bewildered may go here to return to the very beginning of this Gold View Award©-winning 36-volume memoir.)

“Aramis, Athos, Porthos. Moe, Larry, Curly. Manny, Moe, and Jack. The Father, the Son, the Holy Ghost. Tinker to Evers to Chance. Hope, Crosby, and Lamarr. To these great trinities of literature and history must now be added the names Big Ben Blagwell, Ferdinand the fly, and -- Arnold Schnabel.” -- Harold Bloom, on The Joe Franklin Show.

“Waitin’ on you, boss,” said the fly. Ferdinand. The fly. It still felt funny to think of him as Ferdinand. After thinking of him solely as “the fly” for so long (actually about twenty-four hours, although it felt like approximately fifteen months) I had only just been begun the process of accepting his name as Francis. “Well?” he said.

“You said you wanted to go, and now you’re just standing there.”

“This,” said Ben, nodding in my direction.

“Seen it plenty of times in my career,” said Ben, inhaling his Sweet Caporal smoke, which he really did appear to be enjoying; at any rate he was certainly acting like someone who was really enjoying his cigarette. “Plenty of times,” he said again.

“Yep,” said Ben, nodding his head, staring off and downward, as if into his storied past.

“Do you?” said Ben, his head slightly cocked, looking at the fly from under the brim of his cap.

“Sure,” said the fly. “Like guys who act all weird and shit.”

“Well, that too, my friend, that too,” said Ben, “-- but, no, more particularly I was thinking of the kind of guy who’s all raring to go on some wild caper fraught with danger, and then when the moment of truth comes he freezes. Turns to stone.”

Ben tapped his cigarette ash down to the floor, even though he knew where the ashtray was. But I suppose in his defense it could be said he was lost in a revery.

“Back in the big one,” he said, “I was the coxswain of a Higgins boat, bringing the boys in to storm those beaches defended by bloodthirsty and suicidally unyielding and obdurate Japs, and let me tell ya, sometimes them boys just didn’t want to get out of the boat.”

“Well, it’s understandable, really,” said Ben, admiring the lit end of his cigarette, that glowing little red eye through which had passed the smoke which now filled every square inch of space in my tiny room. “All of a sudden them boys realized there was a good chance they were going to get killed.”

“We kicked ‘em out of the boat, pulled up the ramp, and hauled ass back to the troop ship for another load.”

“Cool,” said Ferdinand, there I wrote his name, but it still feels funny. “Hey,” he said, “ya want me to take a look outside the door first, make sure that crazy broad ain’t out there?”

“The crazy broad,” said Ben, smiling. “I keep hearing about her.”

“That’s ‘cause you ain’t met her yet”

“She’s all right. I wouldn’t kick her out of bed.”

“I’ve always had a soft spot for dames who spell trouble," said Ben. "Trouble with a capital T, like TNT. Dames who ain’t happy till they drag you down into a vortex of madness and lust, betrayal, and death.”

“No kiddin’?” said the fly, and I thought I heard a note of admiration in his tiny voice.

“He says he ain’t bangin’ her,” said the fly. “But she seems to think otherwise.”

“Well, I really prefer not to talk about it,” I said.

“Oh, come on!” said the fly. “Enough with the Catholic choirboy act.”

“Nothing at all,” said the fly.

“Whatever,” said the fly. “Pulling out?”

“Pulling out,” said Ben. “Or I guess maybe being pulled out.”

“I like to finish what I start,” said the fly.

“Same with me, brother,” said Ben.

“Fuck that shit,” said the fly.

“So was it like that?” said Ben, for some reason asking the fly and not me.

“Okay, now by we you mean you and the crazy broad, right?” said the fly.

“You took her home, drunk,” said the fly.

“I really just ran into her on my way home,” I said.

“No, really,” I said. “And there were other people there, anyway.”

“Other people?” said the fly. “The plot thickens. And into what species of a rancid bouillabaisse I shudder to think.”

“Look,” I said, “I’d really prefer not to talk about what happened.”

“There, see, I knew something happened,” said the fly.

“Nothing happened, really,” I said.

“Then how’d she get that big bruise on her forehead,” said the fly.

“Like a ripe shiny plum on her forehead,” said the fly. “How’d she get it, Arnie?”

Just standing there in that smoky tiny garret, even in my polo shirt and bermudas, I was now streaming with sweat all over again. I suddenly felt as if I’d lost ten quarts of bodily liquids just in the last five minutes.

“Yes, sir!” the fly said, standing to attention in the air a foot or so away from my face.

“You’re welcome,” I said. “So could you please just fly out and see if Miss Evans --”

“Okay, so I fly out,” said the fly; “if the coast is clear I come back in and give you guys the go-ahead. I know the drill.”

“And what’s the magic word,” said the fly.

“Let’s go please,” I said. Would I ever get out of there? Maybe not.

The fly flew back in through the crack.

“Any noise from her room?”

“The one down the hall there?”

“I think I might’ve heard snoring.”

“Come on, let’s go,” said Ben. “It’s stifling up in here. Hot and stifling like the engine room of a tramp steamer in the Sulu Sea in the rainy season.”

I pushed the door open, went through, and started down the hall, walking slowly and carefully, with Ben a few paces behind me and the fly buzzing along slightly ahead of me.

As I came to Miss Evans’s door I halted, holding one hand up so that Ben would not come lumbering into me and send me sprawling along the floor. I listened, my head cocked in the direction of the door. The fly circled slowly above my head, making only a very gentle buzzing sound. Behind me I heard Ben’s raspy breathing, although I believe he was trying not to breathe loudly.

The framed photograph of Robert Taylor looked down on us from his place on the wall, his expression one of wry amusement dissolving inexorably into boredom.

Then, sure enough, I heard wafting from within Miss Evans’s room the gentle and almost childlike sound of a woman snoring.

Well, good for her, at least she had escaped the DeVores, and God knows she had seemed in need of a nap when last I had seen her.

I continued to the staircase, Ben behind me and the fly now leading the way, and quietly downstairs we went, none of us saying a word until we had descended past the second floor landing.

(Continued here, because such is our destiny.)

(Please turn to the right hand column of this page to find a listing of links to all other available chapters of Arnold Schnabel’s Railroad Train To Heaven©. Many thanks to everyone who helped make last week’s Arnold Schnabel Walking Tour in Cape May such a resounding success, and we hope everyone got home safely.)

"...And into what species of a rancid bouillabaisse I shudder to think.”

I wonder if Ferdinand would mind if I quoted him: its a great line.

Ha ha -- I just spoke with Ferdinand, Kathleen, and he said it's all yours, baby!

I hope Ferdinand doesn't know the average life span of a fly. But then, this is Arnold-time.

Arnold -- the man who conquered time without even trying...