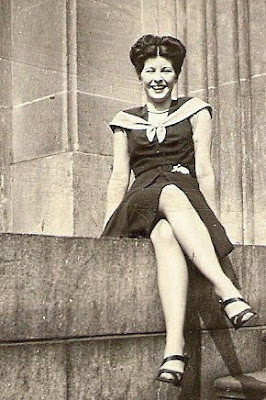 My mother, Mary Dolores “Dolly” Leo, was born Oct. 4, 1929, right into the beginning of the Great Depression. Her mother died when she was still a child, her father was was an amiable but alcoholic bartender. She grew up very poor in North Philadelphia, with nine siblings.

I live in Philadelphia, but twice a year I would go to go visit my mother in her little cottage in Cape May Court House, New Jersey. I’d usually stay from Monday through Friday, and we wouldn’t do much. We’d sit together and read. When we felt like talking we would talk, when we didn’t feel like talking we wouldn’t. Often she would have her TV shows on. In the morning it was Regis and Kelly, The View, later it would be Oprah, at night it would be the cop shows, CSI, NCIS. I would take long walks along her road, then I’d come back, we would read, take naps, watch TV, talk when we felt like talking. She did most of the talking, which was fine by me.

She would talk about her Dickensian childhood. It sounded awful to me, it was awful, but she wasn’t looking for sympathy, to her it was just talking, remembering. She talked about meeting my father, their working-class courtship. My dad was a young World War II vet who’d lost his leg in Europe, he was at loose ends apparently, getting by on the GI bill and his disability pension, not worrying too much about a regular job. They got married when she was eighteen, and within a year they had their first child. My dad settled down. At first he worked in a shop that made artificial legs like the one he wore, then he became a tool-grinder.

The family eventually settled in the Olney section of Philadelphia, in a rowhome at 431 W. 65th Avenue. My mother moved with my younger sister from the old neighborhood to Cape May, NJ in 1981.

I live in downtown Philly, but a couple of years ago or so I started going up to the old neighborhood occasionally with a friend to eat at Kim’s Korean BBQ on 5th Street. On several occasions I took my friend on long walks through the old streets, just soaking it all up.

When I would go to visit my mom I would talk about these walks through the old hood, and we would open up the memories. Nothing special, nothing all that unusual, just the memories of a quiet working-class Philly neighborhood.

She died very suddenly in her beloved little cottage, and this is the way she wanted to go. We always had a long talk on the phone every week, and I got the word of her death just as I was about to call her up for our usual chat. Our last words to each other had been a mutual “I love you”.

I’ll miss her to the end of my life.

(I was trying to think of some of the odd records in our little LP library back on 65th Avenue: Hank Williams, Dinah Washington, Eddy Arnold, Marty Robbins, Babatunde Olatunji's "Drums of Passion", Mitch Miller's "Sing Along" albums...then I remembered Ruby Murray, and this song. It's called "If You're Irish Come, Into The Parlour", but with my mom it would have been more like, "If You're A Good Person, Come Into The Parlour"...)
Posted by Dan Leo at 12:20:00 PM

Very nice, Dan. I'm happy to have had the pleasure of knowing her. She was a great lady and I loved her. She will be missed.

What a wonderful tribute.

A world worth striving for.

"A world worth striving for."

Thanks, Joie -- I can't remember if you ever met my mom, but she would've loved you. You were just the sort of person she loved best: open-minded, fun, loving, independent...um, cigarette smoker, cocktail drinker...

I meant to add, that photo is awesome.

Unselfishness, I've always thought, is what every mother should be. It's rare that anyone's truly unselfish, but your mother was undoubtedly extraordinary.

It's a staggering loss when someone so loving and accepting dies. I was going to say: You were lucky to be so close, but that wasn't luck; it was you and her, so of course you were close.

You were lucky she was your mother, though. And although there's no telling, I hope this remembrance helps to keep her close.

Tough loss, Dan. I'm glad you could write about her for us. Now we all knew her, at least a bit.

Thanks, Kathleen and Manny. Yeah, I was lucky. I still am!

Dean -- I'm already looking forward to that next trip up to Kim's BBQ. Maybe next time Anney will come with us!

thanks for sharing this with us, dan. "There wouldn’t be very much talk about love, but there would be a lot of love." this, and the part about the cigarettes and drinks, was my favorite. take comfort in yr memories.

Beautiful. My deepest condolences, Dan. Losing a parent is like losing part of your body.

"Losing a parent is like losing part of your body."

Yeah, so very true. But we cherish the person that lives on inside us.

Thanks so much, Farran. When all of a sudden I sat down and found myself writing this little thing yesterday, which was the day after the funeral, I have to say that in the back of my mind was the lovely remembrance you wrote about your mother-in-law. And later in the day when I wanted some verbal comfort food, your blog was one of the places I went to.

So sorry, Dan. Your tribute was beautiful and I bet she would have loved it. And her photo up top is fabulous!

Thanks, Beegie -- she would've definitely loved you!

Dan your mother always seemed regal to me! I loved her laugh, her smile and how easy it was to talk to her.
I envied Katie with her Oscar Mayer Bacon and Oscar Mayer Hot Dogs! LOL Now that I'm all grown up I insist on only those kids...all because of Mrs. Leo!
I loved coming to your Mom and Dad's house on 65th Ave. She always treated me like I was one of her own.
Thank you for sharing this Dan. Your Mom was one heck of a lady!

That is so beautiful. You have me crying. Thanks for sharing your memories of your amazing mother.