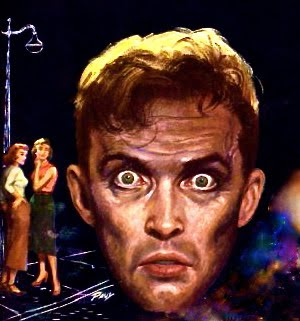 A wet hot night in the summer of 1957, and our hero Arnold Schnabel (in his current incarnation as “Porter Walker, romantic young poet), strolling along Greenwich Village’s MacDougal Street with his new friend the talking fly, has just seen his old friend Josh (AKA the son of God) come stumbling involuntarily out of the San Remo Café...

(Click here to see our previous chapter. New arrivals may go here to return to the very first chapter of this Gold View Award™-winning multi-volume memoir. “There are two worlds really: this so-called real world in which we toil and moil our tedious ways to the grave, and then there is that infinitely better, finer, and so much more interesting world -- I speak of course of Arnold Schnabel’s World.” -- Harold Bloom, in Better Homes and Gardens.)

“Go home and sleep it off, buddy!” yelled the voice from inside the bar.

Well, that wasn’t strictly true, I thought. I had seen him passed out cold just the other night. But then that had been in the future, so maybe he was right after all.

“Wait,” said Josh, even though the door had already been slammed shut. “Let me think. No. Two. Two thousand years!” he yelled, at the closed door.

“Listen to this nut,” said the fly.

Not meaning to, I had spoken aloud.

Josh looked over at me. I walked up to him.

“Arnold,” said Josh. “Or should I call you Porter?”

“Did you tell me to be quiet?”

“I didn’t hear anything,” I said. I really don’t know why I was lying.

Okay. Lying to the son of God. But I just didn’t feel like going into the whole fly thing with him.

Josh stared at me, then his eyes closed, his head swayed on his neck, and for a moment I thought he was going to pass out. Then suddenly his eyes popped open again.

“Hey, Arnold, Porter, do you believe it, they threw me out of that place!” He turned back toward the entrance and yelled, “Hey!” but then he finally seemed to realize that the door was closed. After staring at it for thirty seconds he looked ready to yell something again anyway, but then he changed his mind and turned back to me. “So, how’s it going, Arnold?”

“Ha ha, this guy is plastered,” said the fly.

“Wait,” said Josh, “didn’t you hear something just then?”

“Hey, what’s that?” he said, pointing to the damp floppy sheath of typescript I was still carrying around.

“What?” said Josh. “I thought I heard something again --”

He looked to the right, then to the left.

“Listen,” I thought, very firmly, as Josh continued to look all around, “listen, fly, will you please try to keep it down? I need to talk to this man.”

“What’s good?” said Josh. He was looking around on the pavement now. “What’s so great?”

His hat was still lying where it had landed, about five feet away on the pavement. I went over, picked it up, brushed it off, came back and handed it to him.

He plopped the hat on his head. As much as I hated to agree with the fly, there was no doubt that since I had seen Josh this afternoon he had gotten very drunk. His hat was on crooked, and his sandy locks were plastered to his forehead with sweat; his pale blue suit had gotten wrinkled and stained and cigarette-burned; the knot of his tie was loosened and askew, the top three buttons of his shirt were undone, and his shirttails were out. He had a big bruise on one cheekbone, and the beginning of a black eye on the other side of his face.

“Well, I’m still stuck in this fictional universe, as you can see,” I said.

“Oh, right, of course. But outside of that, how are things?”

“That’s great, really great.” He patted his pockets, then brought a crumpled pack of Pall Malls out of his side jacket pocket, and from his other pocket he brought out a lighter. “Cigarette, Arnold? Porter. Porter? Porter. Cigarette?”

He shook the pack several times, staring at it. When one cigarette had emerged to what he deemed an acceptable length he popped it into his mouth, then put the pack away and began patting his pockets again. “Where’s my lighter? Think I lost my lighter. Or someone stole it.”

He clicked the lighter, it was a handsome one, a Ronson maybe, black enamel and gold. After four or five tries a flame ignited and stayed ignited, and he lit his cigarette.

He let out some smoke, looking contented, and said, “So, that’s really great,” he said.

“Well, I said they were going 'okay'. Considering.”

“Oh. I see your point. Although some people might say you’d be better off in this world. I mean, look, you’re young, you're good-looking, you’ve got a big book contract -- I’ll tell you, all those bums in there are jealous of you. Kerouac, Ginsberg, Corso.”

“That was those guys I was talking to earlier?”

“Yeah, and William S. Burroughs. Author of Naked Lunch? I mean he hasn’t written it yet, but soon he will.”

“I’m sorry, I don’t really know who any of those guys are.”

“Not even Kerouac? On the Road? Jack Kerouac?”

“Well, I think I might have seen him on Steve Allen, now that you mention it,” I said.

“And it may be stupid, but I’d still prefer to go back to my old life.”

“Oh. Because of Elektra.”

“Yes, all of them, even my Cousin Kevin.”

“Even Miss Evans? And what about that really boring couple. The what, the Van Dorns?”

“Listen, Josh, from what I’ve seen there are just as many boring and irritating people in this universe as there are in my old world. If not more.”

“Yeah, I guess they’re in every universe, huh?” he said.

“What,” said Josh. “Who said that? Did you hear something, Arnold, I mean Porter?”

“Hee hee hee,” the fly giggled in my ear.

“Listen, Josh, how about we talk about getting me out of here.”

“Yes. Yes, of course we’ll, uh, talk about that. But let’s have a drink while we’re talking.”

He looked down at himself.

He stuffed his shirttails into his pants, buttoned up his shirt, straightened his tie and tightened its knot.

I don’t think Josh heard it, but the fly made a jocular noise in my ear, like those hissing sounds that boys make in the back rows of a classroom when one of their fellows has declared in catechism that there are three Gods.

“All right,” I said, not without misgiving. But I had to find a bathroom, either that or just duck in an alley somewhere, and I had a powerful thirst for beer myself.

Josh pointed behind me, and I turned.

“Oh, swell,” whispered the fly, in my ear. “Here come the bitches.”

It was Pat and Carlotta, walking down MacDougal toward us, Pat in her black dress, Carlotta in red, Carlotta swinging her umbrella like a drum majorette’s baton.

“You have to introduce me,” said Josh.

“What an idiot,” whispered the fly.

“Sheesh,” whispered the fly. “So who knew the son of God liked to get his load on?”

(Continued here, and indefinitely as part of my court-mandated community service.)

(Kindly look to the right hand column of this page to find an allegedly current listing of links to all other published chapters of Arnold Schnabel’s Railroad Train To Heaven© sponsored in part by the United States Army™. “Hey, it beats working at Mickey D’s!”)

I still can't believe the Catholic League of Decency hasn't shut this blog down.

I read about a woman saint (don't recall the name), who railed and ranted at the Son of God whenever she prayed, which was all the time. The Powers That Were named her a saint because she obviously had been spiritually intimate with Him. Perhaps her anger had to do with His habitual drunkenness. The author described her anger as coming from His part in making Life a Misery. But habitual drunkenness can do that--so maybe.

Manny, fortunately Arnold has friends in high places in the Church.

I still can't believe the Catholic League of Decency hasn't shut this blog down.

No doubt where the son of God likes to drink.