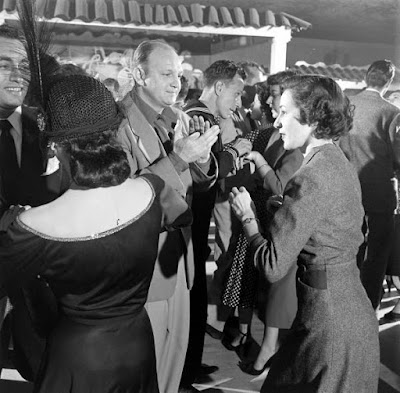 Let us rejoin our memoirist Arnold Schnabel in a village called Greenwich in the summer of 1957 , in that cynosure of Bohemia the San Remo Café...

(Click here to go to our previous episode; the adventurous may go here to return to that faraway first chapter of this Gold View Award™-winning 27-volume memoir. “The only book I took with me on my most recent hunting trip.” -- former Vice President and Viagra spokesman Richard “Dick” Cheney.)

I left him to it, poor fellow. Like all of us he had to find his pleasures where he could. I went out and closed the door behind me.

The bar was now packed, it seemed somehow to have gotten twice as full during my brief sojourn in the men’s room. The happy hour had arrived, people coming in after their hard day’s work, or, even if they didn’t work, coming in anyway, what the hell, sometimes just being alive is hard work, and besides, who among us really needs a special reason to get drunk, to be with other people getting drunk, to shout nonsense, to listen or pretend to listen to other people’s shouted nonsense, or even just to sit quietly and get slowly plastered, gently cushioned inside the chatter and the jukebox music, the warmth and smell of bodies, a rich lulling fog of cigarette smoke...

I stopped and stood down near the end of the crowded bar. At the other end of the room I could see that Josh had pulled a chair up to the other guys’ booth and had joined them. All five of the fellows raised shot glasses in the air and then drank their contents down.

Now don’t get me wrong, I was sincerely glad to find Josh here, but the thing was I really needed to take a nap, and the last thing I wanted to do was to join in on another boozing session so soon after the last one.

So I hesitated, wondering if I should just walk out, ask someone for directions to my address and go home, or at least to what was my home in this world.

But that would be rude, and socially inept, even by my own liberal standards.

The thing to do was to take a firm stand with Josh and these apparent friends of mine: no, I really didn’t want a drink, and yes, I really must go home.

If Josh and the others couldn’t accept that, well, too bad then.

“Why are you standing there so lost in thought?”

This was said by a short-haired young girl sitting on a bar stool directly to my left. She held a beer mug in one hand and a cigarette in the other.

She seemed awfully familiar, but who did I know in this world?

“I’m trying to figure out a way to escape,” I said.

“From those guys over in that booth over there, up near the front.”

“Oh my God, are they your friends? Allen, and Gregory, and Jack and Bill?”

“Who’s the other guy?

“What does not ‘really’ mean?”

She was speaking quite loudly because Perry Como was still on the juke box singing loudly about papa and mama both loving mambo.

“Well,” I said, “he doesn’t really write things down, I think. But he -- tells proverbs, sort of gives sermons --”

I was having more trouble than usual making sense, and not just because of the subject matter at hand but also because this girl seemed so familiar. She looked to be about eighteen or nineteen, and she was quite beautiful, with her Audrey Hepburn sort of hairstyle --

“So, is he like Lord Buckley, or Professor Irwin Corey?”

“A little,” I said, just to say something.

“That’s cool. Does he perform around town?”

“He occasionally, uh, performs for crowds of people,” I said.

“I don’t think he’s worked in night clubs,” I said. “Weddings, though. Feasts.”

“So who is he anyway?” asked the girl.

Suddenly I grew tired of my prevarications. What did I have to lose? I told her the truth.

She laughed, and when she laughed I suddenly realized who she was.

She was Elektra, six years younger and with a pixie haircut.

“Why are you looking at me like that?” she asked.

I became aware of three other young people sitting on the stools along the bar near to Elektra. All three were turned and watching us. They were the younger versions of Elektra’s friends Gypsy Dave, Fairchild and Rocket Man.

“Are you a weirdo?” asked Elektra.

Of course I was, and am. But I didn’t want to frighten her.

Betsy. So this was before she changed her name.

“Don’t be modest. You must be good if you’re friends with Allen and those guys.”

“Well, I’ve read some of my stuff, and I wasn’t very impressed.”

“Hmm. A writer who’s not a braggart. That’s very odd.”

I’ve neglected to mention, she was wearing one of those summery dresses, with a full skirt and a belt, the dress was yellow with little blue cornflowers all over it.

And I suddenly realized the world was no longer in black and white, but in rich color. In fact I think it was Technicolor.

Her skin was the color of vanilla saltwater taffy, her lips were red and shimmering, her eyes were a deep glimmering brown that called to mind walking through Fisher Park on a rainy All Soul’s Day after church.

But then I couldn’t think of anything to say.

“Yes. Among other things.”

“Have a drink with me and my friends.”

“I’ve already had too much to drink, I’m afraid.”

“You do look a little shall we say tired.”

“I mean Betsy. Betsy. This might seem very forward of me, but --”

“Aren’t you seeing me now?”

At least she was smiling as she said this. She turned and stubbed out her cigarette in a glass ashtray on the bar, and just her turning this way, the light on the skin of her arm, just this made me want to kiss her bare neck.

“How about later tonight?” I managed to say. “Dinner.”

“Dinner and a movie?”

“Or maybe just a sandwich,” I said.

I had just remembered that I had no idea how much available cash I had.

“So already you’re hedging your bets.”

But then it occurred to me that I could probably borrow some money from Josh. There were definitely privileges attendant upon being his friend.

“I’ll take you anywhere you’d like to go, Betsy.”

“I was just kidding, Porter.”

“Let’s make it the Kettle of Fish. Eight o’clock.”

“You know where it is, right?”

She had no idea.

(Continued here, if only because the doctor says it’s good for me to keep occupied.)

(Kindly refer to the right hand column of this page to find a quite possibly up-to-date listing of links to all other extant chapters of Arnold Schnabel’s Railroad Train To Heaven©, absolutely free, gratis, and for nothing, although the wealthy among our readership are encouraged to click liberally on the Paypal button.)

The happy hour had arrived, people coming in after their hard day’s work, or, even if they didn’t work, coming in anyway, what the hell, sometimes just being alive is hard work, and besides, who among us really needs a special reason to get drunk, to be with other people getting drunk, to shout nonsense, to listen or pretend to listen to other people’s shouted nonsense, or even just to sit quietly and get slowly plastered, gently cushioned inside the chatter and the jukebox music, the warmth and smell of bodies, a rich lulling fog of cigarette smoke...

Wonderful episode.... sounds like Elektra may save him again.

Emphasis on the word "almost".

That is beautiful, the description of people drinking together...it's as if everyone belongs.
Fascinating juxtaposition going on:
Porter and Betsy and Josh.
And why Technicolor now?
The Perry Como clip made me think (and I never think this), somebody better get Jimi Hendrix on stage before it's too late.

Katheleen: we call it Bar World.

And of course the lovely Elektra/Betsy must be in glorious Technicolor! How else could we appreciate that saltwater taffy skin of her and her deep brown eyes?

How I regret the remark about Perry Como! Manny read it--he'll get to Arnold/Porter story, the important part, later--and ran out and bought a Jimi Hendrix CD that they didn't release 40 years ago, because his other stuff was better. A poster was included.

Uh-oh, time to put on the headphones, Kathleen, and dial up some mellow Mingus or Marley. Jimi was great, but not recommended for those prone to migraines...

Dan,In this case it really isn't the migraines so much as I appreciate Hendrix in theory. And if Manny better put that poster up in his office (or his secret place) if he wants it survive.

And Dean, Big thumbs up to that.

sorry...I had my headphones on and missed much of the conversation.
Excellent post! Makes me nostalgic for the rich lulling fog of cigarette smoke.