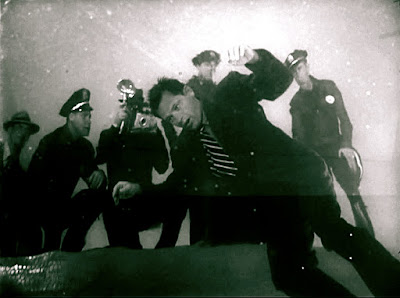 Our roguish hero Buddy is now safely back home in the familial manse in Hollywood, having rescued his daughter Liz from an abusive boyfriend…

(Go here to review our previous chapter, or here to go to the beginning of this “rollicking good read” -- J.J. Hunsecker, in “The Ladies Home Journal”.)

When he came back in Deirdre was sitting in the living room with her laptop on her lap.

“Did you have dinner?”

“I had a veggie burrito after field hockey.”

“Great. Uh, everything okay at school?”

“I’ve been meaning to ask you. What the hell did you say to Mother Mathilde?”

“I -- uh -- I probably -- sometimes my mouth works a lot quicker than my brain does.” Putting it mildly. “How is she acting toward you?”

“You cool with that?”

“Sure. I have nothing to say to that fascist old dyke. Is Liz moving back in?”

She started tapping at her keyboard.

“Debbie Greenberg likes you by the way,” she said, not looking up.

She stopped typing and looked up at Buddy.

“Don’t fuck her over, Uncle Buddy.”

“You know exactly what I mean. Debbie’s a nice lady. Not one of your actress or P.A. bimbos.”

“It was different with my mom. With her I don’t blame you. Not too much, anyway.”

Deirdre looked at him.

“Fine,” said Deirdre, and she lowered her gaze to her laptop screen.

Buddy decided to swim as many laps as he could, and as he swam, occasionally spitting out bits of organic matter, one of the things he thought about was how he was thinking about Debbie Greenberg instead of about Liz and her problems. And not only about Debbie, but about what Deirdre had said about Debbie and him, and about him, and then he thought about the woman in the Nomad last night, and about Marlene, and about Marlene’s body, and then he thought some more about Debbie, and her body -- okay, Marlene, what was her story? Divorced, with a kid. Debbie, too, divorced with kid, a little girl -- Rachel? no, Ruth, Ruthie, whatever, it was chaos. People hooking up, propagating, breaking up, propagating again…

And Joan -- all right, why the fuck had he given a fuck when that bitch walked out? Joan had driven him nuts. She had bored him to tears. Okay, he had been madly in love or whatever the fuck it was with her at one time, enough of what it was to break up his first marriage. And then of course he had gotten less and less madly in what it was with her. But on the other hand he’d fallen more and more in whatever with Deirdre and she wasn’t even his own kid, it was weird, but he had to admit it, he loved Deirdre more than he loved either Philip or Liz, not that he didn’t love Philip or Liz, but, oh fuck it...but -- what if Joan came back? This was possible. And the thing is, with all her idiocies, he was used to Joan. He could live with Joan. He had lived with Joan quite contentedly really, for twelve years. He had always looked forward to coming home to Joan, to Joan and Deirdre. And Joan was funny, funny ha ha, not always intentionally funny, true, but a constant source of amusement nonetheless, nearly constant, and a great cook too. Oh, sure, he wasn’t sexually attracted to her anymore and hadn’t been for years, but who cared about that? Sex wasn’t everything. You could say he loved Joan. Yes. Definitely. In his fashion. You could say...and anyway at least with Joan he would have Deirdre around.

After forty-six laps in the dark murky pool his thinking hadn’t got any more profound, and he realized that he felt like he was going to have a heart attack if he didn’t stop swimming right now, so he hauled himself out of the pool and collapsed on his back on the tiles, gasping what fiery painful final breaths might reasonably be supposed to feel like and staring up at the spinning stars, wondering if this was what it was for him to die. Well, it happened to everybody, and you were a damn fool if you thought you would get it all figured out before you croaked...

Philip stood over him, a cigarette in his hand.

A chest-heaving moment or two, then Buddy said, or croaked:

Okay so he exaggerated the number.

“Cool. Well, anyway, I wanted to tell you I finished making those cuts in the script. You wanta read it? I mean when you’re able to get up?”

Buddy reached out his hand to his son.

“Philip, this is really good.”

“Really. The cuts are good, and -- you’ve made some other changes, I see.”

“No, not at all. Tell you what, I’m gonna make some notes on this script, and I want you to give it another go. Try to incorporate my notes, but if you have any other bright ideas, feel free.”

“I did actually, but I was afraid to, you know -- like that one part right around -- where, here, page what, twenty-seven...”

“Yeah. Don’t worry about it now, but all these scripts have a three-act formula.”

“Yeah, I’ll tell you all about it some other time, but look, don’t tell me your ideas now, just write them in and then we’ll talk it over.”

“You did really good.”

“So I still get like a hundred a day?”

“Right on,” said Philip. “Hey, by the way, what’s this about you and this Debbie woman?”

(Continued here, and at least until a plot develops. Please look to the right hand column of this page for an up-to-date listing of links to all other available chapters of Uncle Buddy’s House™, soon to be a major motion picture starring W.C. Fields as Buddy, Linda Darnell as Deirdre, and “Buster” Crabbe as Philip; a Charles Bogle Production.)

Buddy's not getting away with anything with these kids!

At least Buddy's honest about his tepid, fickle romantic urges. Of course, Samson's right: his kids aren't going to let him play Casanova on a one-shot overnight with someone they happen to know and like.
Honest and sensible: that's better than most of us, even if the combination is cold in Hollywood.

Dan, your characters alarm me with their lack of respect for micro-organisms.

Buddy should know better, after all he has served in the armed forces, and crewed on a spaceship (I think).

Good on Deirdre! I love your strong females!

Yeah, Kathleen, unlike some of my protagonists, Buddy is all too human.

And, yeah, guys, Buddy is totally busted by the young people.

(Sorry for the in-joke, fans. I had been bitching to Jen about the folksy music in Ken Burns documentaries...)