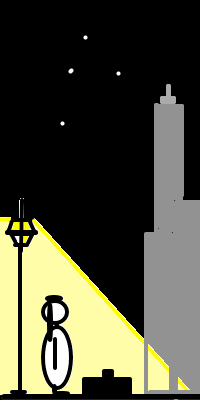 It had been Terry Foley’s luck (whether good or bad no one could say) to complete his modicum of required military service between the end of the Second World War and the beginning of the Korean police action, and ever since his honorable discharge he had been, with the help of the G.I. Bill, “working on his novel”.

Terry was a harsh critic of his own work, and he had summarily abandoned the entire 3,100-page first draft of his novel, set on an army base in Kansas, titled variously I Got the Olive Drab Blues; Last Call for Chow; Make Mine Khaki; and Ten-hut, Private Hooley!   Terry had put a lot of time and effort into that draft, and for each sheet of completed typescript he had filled up God only knew how many pages of marble copybooks, and how many aborted sheets of expensive 20-lb typing paper had wound up in the waste basket or had been scissored up and converted into cigarette papers? But, let’s face it, who wanted to read about life on a dreary old army base in Kansas? It had been bad enough living through it all, let alone writing about it, and finally his own boredom and common sense won out. Terry shoved the whole enormous pile into his footlocker and began afresh with a saga of a young man from the provinces, fresh out of the service, who comes to New York City to become a novelist. He was four hundred pages into the first draft of this new approach now; working title: Say, There, Young Fellow!

Terry was twenty-four years old, and he was a virgin, he had no idea why. Well, no, actually he had a lot of ideas why, and these ideas were covered in detail in his novel. But could his novel be any good if his protagonist, Jerry Hooley, never lost his virginity? Would anyone want to read a Bildungsroman with no sex, let alone no romance?

The time of the year was August, a hot and oppressive August, but, Terry wondered, was there any other kind of August? He lived in a small studio apartment with no air-conditioning on Bleecker Street near the Bowery. One Wednesday afternoon a week he attended a summer creative-writing workshop at N.Y.U., but other than that his time was his own. Not counting his two years in the army he had never held a job since his boyhood paper route, and Terry was content to live off his modest government stipend and the odd ten-dollar bills sent to him by one or the other of his two grandmothers and four maiden aunts back in Ohio.

On a typical morning, shortly after the heat awakened him, usually between ten and eleven a.m., Terry would gather up his marble copybook and his #2 pencils and stagger downstairs and across Bleecker Street to the air-conditioned comfort of Ma’s Diner,  and there he would while away the rest of the morning and afternoon and early evening drinking copious cups of coffee, eating up to four or five slices of Ma’s delicious pies, and scribbling away in his copybook. When he grew tired or when the creative afflatus abandoned him, he would read a book or someone’s abandoned newspaper or movie magazine, or simply stare out the window at the passing parade of humanity. In the evenings he would take public transportation uptown to the Thalia or across town to the Waverly on 6th Avenue and catch a foreign film or a 1930s screwball comedy; afterwards, his long day done, it was back onto the el or the bus and home to his tiny apartment.

One day in Ma’s Diner a young woman sitting on the next stool addressed him.

“Excuse me, but I see you in here every day, writing in that copybook. May I ask what you are writing?”

Terry was not used to being addressed by strangers, and it took him several moments to rouse himself from his reveries.

“If I am being intrusive,” the young woman said, “please feel free to say so.”

“Indeed?” said the young lady, who, despite the season, was dressed all in black, topped with a black beret. “May I ask what is the thrust, or theme, or argument of your novel?”

“To put it bluntly,” said Terry, “it’s about a young man who comes to the city to become a novelist. But, of course, it is about many other things as well.”

“Of course,” said the young woman. “This is really quite the coincidence, because you see I too am writing a novel.”

And she tapped the large black leather-bound notebook lying on the counter before her.

Terry wished he had one of those handsome nice notebooks, but what was the use, his bohemian mode of life precluded such extravagances. Maybe he should move to Mexico, where the cost of living was allegedly much cheaper, where he could afford nice leather-bound notebooks instead of these cheap dime store copybooks? He bet Ernest Hemingway didn’t write in cheap copybooks. Or did he? He must go to the library and look up that New Yorker profile. He couldn’t remember if Hemingway’s preferred writing materials were mentioned in that, although he seemed to recall reading somewhere that Hemingway used #2 pencils, so at least Terry had that part of the deal covered…

“Do you want to know what my novel is about?” said the young woman.

“It’s about the journey of a young girl who goes from a Catholic girls’ school to Vassar, and then she graduates and comes to the city to pursue a career as a jazz poet, and, yes, to awaken to her womanhood. But of course it’s about loads of other stuff as well.”

Womanhood, awakening. Loads of other stuff…

Suddenly it dawned on Terry that here was a girl – and, a bonus, a pretty girl – initiating a conversation with him, in a diner, and that this was like a pivotal scene in a novel: the boy meets girl scene.

This was his big chance, possibly. A new chapter in his life as well as his novel. He must not blow it. He must say the right thing.

“I would love to read some of your book,” he said, which was not entirely true, but probably much preferable to saying what he was actually thinking.   He wanted to take a quick moment to write the previous sentence down, but, no, he would just have to try to remember it and get it down later. He must try to stay in the moment.

For her part the young lady, whose name was Araminta Sauvage, was thinking: could this be the plot turn, mutatis mutandis, she had been searching for in her own novel, the working title of which she had recently changed from Virgins of Vassar to The Womb of the City?

This chap was not the best-looking fellow she had ever met, but, after all, what was more important: looks or brains? And wasn’t it high time that she (as well as her heroine, Amanda Bricolage) divested herself of her tedious so-called chastity?

“I’d be delighted to show you some pages of my novel,” she said. “But you must let me read some of yours.”

But what he said was, “Gee, that would be swell.”


{Kindly click here to read the “adult comix” version in A Flophouse Is Not a Home, illustrated by the one-and-only Rhoda Penmarq…}
Posted by Dan Leo at 9:37:00 AM