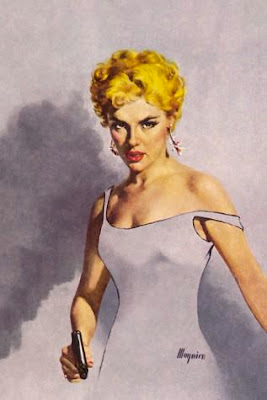 Shirley came out onto Eighth Avenue, put her old Gladstone bag down on the pavement, and lit up a cigarette. It had been a short bus ride from Philadelphia, a town that hadn’t worked out well for her. Neither had Detroit, Chicago, Milwaukee, or especially her hometown of Sheboygan. But she was still young, still blond, and still beautiful, if perhaps not unspoiled.

“Hey, doll,” said a weedy looking man. He wore a shiny grey suit and a grey hat and he was somewhere in age between twenty-five and forty. His skin was grey and his eyes were blue. He had a toothpick in his mouth and he was either smiling or grimacing in pain. “You look like you could use a drink. How about you and I adjourn to a nearby watering hole and have a cocktail or three? I am buying.”

Shirley was a little low on cash and so she went across the street with the weedy guy into a bar that was just filling up with the after-work crowd. When the guy went off to the men’s room after his fourth glass of Rheingold she picked up her Gladstone, walked out, went up the street, took a right on 41st and went into another bar. She took a stool, ordered a ginger ale, opened up her purse on her lap, and took out the weedy guy’s wallet. Some useless cards, sixteen bucks, a French letter, and what looked like a marijuana cigarette. She took out a dollar bill to pay for her ginger ale and put the wallet back in her purse, along with her own lucky Girl Scout wallet, her lipstick and compact, her cigarettes and lighter, an opened roll of Wint-O-Green Life Savers, a handkerchief, and her Colt .32 automatic.


(Scroll down the right-hand column of this page to find a listing of links to the opening passages of many other strangely out-of-print classics from the battered Royal portable of Horace P. Sternwall. “To be quite honest these obscure noir novels of Sternwall’s make those of his contemporaries Jim Thompson and David Goodis look positively soft-boiled.” -- Harold Bloom, in The Cape May Herald.)
Posted by Dan Leo at 1:17:00 PM