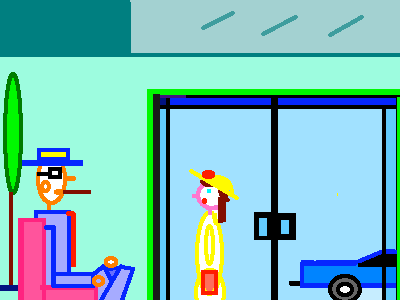 Mr Phineas “Farmer” Brown had come to the city well over thirty years ago when he was a young man, ostensibly to seek his fortune. He had moved into his current rooms at the St Crispian during that first year, back when he still at least made a pretense of seeking his fortune or indeed any sort of paid employment at all. His monthly bills at the hotel were paid by his family’s banker back home in Peru, Indiana. The banker also remitted to the hotel the sum of three hundred dollars per month for Mr Brown’s “personal” expenses, with strict instructions that he was to receive no more than ten dollars of it on any given day. Mr Brown laughingly referred to this daily remittance as his “salary”, and he picked it up, in the form of ten crisp one-dollar bills, at the front desk every morning at eleven-thirty on his way to the coffee shop for his breakfast.

Although he was fond of the ladies, Mr Brown had never married. When people asked why, and they did – people are very nosey – he would chuckle and say that marriage seemed “too much like work”.

Yes, the days when he had even pretended to seek employment were long gone, as were the days when he “had a few irons in the fire”, when “he had a couple-three deals working”, when he was “looking into some business opportunities down in Costa Rica, lots of money to be made down there”; gone the time when he had bought a smock and some paints and brushes and taken classes at the Art League, or when he was supposedly “working on a musical based on Stephen Crane’s Maggie: A Girl of the Streets (retitled, simply, Maggie!)”, all those days were gone.

Now he never pretended to be anything but what he was, a lazy idle loafer, living off a tiny trickle from the enormous fortune his hardworking grandfather had made in the hog business. 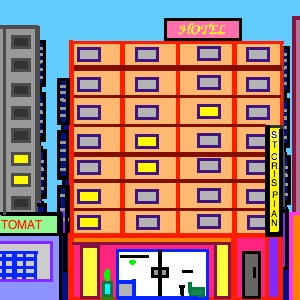 “This is my fortune,” he would say, waving his hand in a gesture that seemed to take in not just the rigorously quaint lobby of the St Crispian, but even the great world beyond it, even though he had not traveled farther than six blocks in any direction from the hotel in perhaps twenty years.

Smiling in his genial way.

And who are we, dear readers, to say that he was wrong? 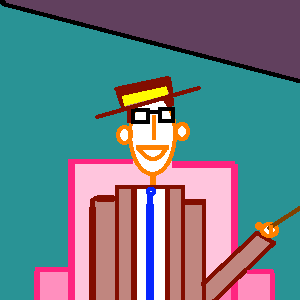 (Because of the Christmas festivities, Arnold Schnabel has taken the week off, but he will be back next week with an all-new and thrilling episode of Railroad Train to Heaven!)

Excellent attitude for those who can afford it. Bet his mother never called him "Farmer."

More likely she called him, "Phineas, you lazy idle loafer!"