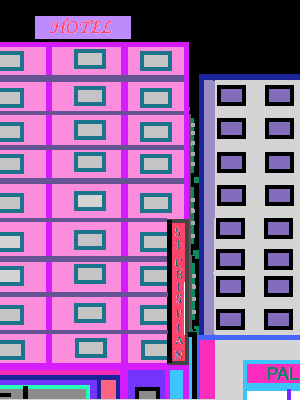 
This had certainly not been Mack Treacher’s first visit to the Hotel St Crispian, but his previous times here had been in – what? 1950. Then 1952, and, what was it, 1957? No matter, because now it was February of 1948, and so presumably no one here would know him, not even in this place with its seemingly nonexistent staff-turnover.

“Will you be stopping here for long, sir?” said the lugubrious night clerk, Roland, the same night clerk who had been here in 1950, 1952, and 1957. Mack knew his name was Roland because that was the name embroidered on his blazer. Unless his name was something else and he had merely inherited the blazer.

The Professor had said it would only take one night this time, and Mack was glad.

He rode up to the seventh floor in that little cage-elevator with the slightly sinister bellhop “Jake” and the dimwitted elevator operator, “Mortimer”, or at least those were the names embroidered on their little monkey-suit jackets.

Mack just wanted to get this job done. Get it done and go back to his own world, to his own time, get out of this uncomfortable grey serge suit and back into his favorite outfit of stone-washed jeans, a sweatshirt, baseball cap and black New Balance trainers.

But first he had a job to do.

He had laughed when the Professor had said this really could be his “last” job.   How many times had he heard that one before?   Still, a half a million was a half a million, and maybe even he could figure out a way not to blow it in a month this time.

He had his eye on a plot of land not too far from his shack up in the Sierras, and he had an idea to turn it into a quinoa farm. People said quinoa was the next big thing. Maybe they were right this time. Maybe –

“Here ya go, sir, one of our nicest rooms,” said the bellhop, and he plopped Mack’s old-fashioned heavy suitcase on the bed. Mack hated that suitcase. Call him a pansy, but he liked the modern ones with the little wheels and the handle that you could pull out. Easier on his back, especially the lower right part right above the hip where he’d caught that Minié ball back in 1862 at Bull Run.

“Like what?” said Mack, and he pulled out the pack of Old Golds he had bought from the machine downstairs. That was the one good thing about being in these olden times. At least a man could smoke wherever and whenever he damned well felt like.

This bellhop Jake was on the ball, he stepped right up and pulled a Zippo out of his jacket pocket and waited patiently while Mack smacked the pack a half a dozen times against the shank of his hand, peeled the ribbon off the pack with his teeth, and ripped the pack open with his big battle-scarred fingers, and when Mack had completed the ritual Jake clicked the lighter and gave him a light.

“What I meant, sir,” said Jake, snapping the lighter shut, “anything else I can like get you. Anything at all.”

“That can be arranged, sir. That can definitely be arranged. Nice clean girl, too.”

“Sure, sir. Just phone downstairs. I’ll be on all night. By the way, sir, if you don’t mind my saying so, you look familiar.”

“Yes, last time I checked it was,” said Jake.

“Then I doubt you’ve seen me before.”

“You look awfully familiar. Almost like I carried your bags up once before today.”

“It’s called déja vu, son. It’s the two sides of your brain not quite playing on the up and up together.”

“Yeah. Because this is the first and only time I’ve checked into this hotel today.”

“Yeah. I got some business to attend to first.”

“Business? At nine o’clock at night?”

“Yeah, sure,” said Jake. “Anyway, you need anything, you just phone down to Roland, the night clerk, and tell him to send me right up.”

He reached into his trousers, took out his wallet, took a five from it. He held out the five.

What the hell, it wasn’t Mack’s money, he could afford to be generous.

He looked up and down the hallway.

He unholstered the .45 and held it up, pointed at the ceiling.

Then he took a few steps backward, took a deep breath, then ran at the door and slammed into it with his left shoulder.

The door sprang right open, and there he was, his target, lying on his back on the bed in his shirtsleeves, reading an Amazing Tales magazine and smoking a cigarette.

It was him, Mack Treacher, lying on the bed.

Mack looked at Mack, and the Mack who was on the bed said, “What the hell.”

“What the hell,” said the Mack who was standing there holding the .45 on the other Mack.

“You better close that door, man,” said the Mack on the bed.

Keeping his eye and his gun on the Mack on the bed, Mack backed up a couple of steps, reached behind him with his left hand and shut the door, quietly.

“No silencer?” said the Mack on the bed.

“They forgot to issue me one,” said the standing Mack.

“They always forget something, don’t they?” said the lying-down Mack.

“This is weird,” said Mack.

“Weirder than what we’ve been doing all these years, traveling back and forth in time and to distant galaxies, pulling wet jobs?”

“It was only a matter of time before we got that final contract.”

“We,” said the lying-down Mack. “Because I’ve been sent to take care of the guy in –”

“They sent us both back to bump ourselves off.”

“But – think of this, Mack,” said the Mack on the bed, and he tapped his cigarette ash into the ashtray on the night table, “if you do kill me, then you’ll be killing yourself, too.”

“One of my selves. One of my past selves.”

“What if when you pull the trigger you extinguish your own self as well, all your past selves, and all your future selves, too. You. You and me, with one bullet. Think of it, isn’t that just the sort of caper the Professor would think up?”

“He’s a bastard, that Professor.”

“No argument from me, pal.”

“I know so. Put the piece away. Because I am you, Mack Treacher, and I don’t know about you, but I intend to go back to the year 2014, find that goddam Professor and put a .45 slug into his treacherous brainpan.”

“God I would love to do that.”

“Right, I’ll make him empty it out – I figure he probably keeps twenty, thirty million in there in various nations’ currency.”

“That much. And with that much dough we can disappear, Mack – forever.”

“We. Think about it, brother. All the jams we’ve gotten through solo, what couldn’t we accomplish as a team.”

“Dig it, dude. Now put the piece down, because we got to talk, and to plan.”

“All right brother. You’ve sold me.”

Mack put the .45 back into his shoulder holster.

“Good,” said lying-down mack. Now, how about a drink?”

“Great,” said Mack, and he turned toward the dresser, and sure enough, there was a bottle of Canadian Club on it.

He took one step, and then the bullet hit him, passing through his heart, and the last thing he thought was that maybe, in a way, just maybe he was still alive after all.

(Previously published in somewhat different form and in fully illlustrated fashion in New Tales of the Hotel St Crispian.  And, fear not, sports fans – our friend Arnold Schnabel will be back at his usually scheduled time next week with an all-new thrilling episode of Railroad Train to Heaven©!)

I liked this. Did that Mack know what was up?

I have no idea!