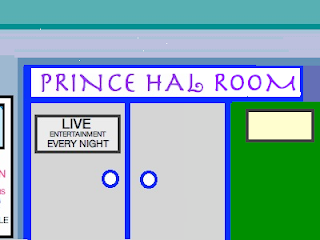 
“Are you here to enjoy the music, sir?” said the strange old man, still politely holding open the door.

Yes, of course, the music, you could hear it from somewhere beyond the lobby, it sounded like a jazz combo, but not one of these new-fangled bebop outfits --

“I must say I’ve never heard of them,” said Michael, taking out his cigarettes.

“They are quite well regarded among the cognoscenti for their interpretations of Chicago-style jazz, and Miss De La Salle, whose début it is tonight, has just recently finished a tour of some several of the southern states in a production of Mr. Porter’s Fifty Million Frenchmen. Or was it the Midwest?”

Still holding the door open, the old man whipped out a lighter and gave Michael a light for his cigarette.

Michael was wondering. Should he pump this old fool about Stan Slade? But what if the old fool was in cahoots with Slade? Everyone knew how venal New York doormen were. It would make sense for Slade to pay the old boy off. No, Michael decided, he would play it cool, like the detectives in the magazine stories.  “So you haven’t come here to hear the music, sir?” said the old man. Which Michael realized was another way of saying, “Why have you come here?”