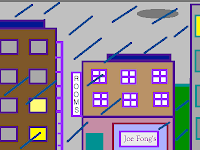 
It was just another cold November day on the Lower East Side.

As usual I rolled out of the sack around two in the afternoon, threw on my best and my only suit, and went down to the Chinaman’s for my usual breakfast of chop suey and three or four pots of lapsang souchong.

Outside the window the afternoon was grey, and some rain started to fall as if it had nowhere else to fall and it might as well be here.

After I ate I poured another cup of tea, lit up a cigarette and took out my little black book.

I had six pick-ups to make, and after them I was free until 8:30, when Big Moe had asked me to meet him at the Mobambo Room.

Big Moe never asked me to meet him at the Mobambo Room.

For that matter Big Moe hardly ever asked me to meet him anywhere, and why should he?

I was strictly small potatoes, so far down the chain of command that you couldn’t get any lower, except the gutter or the grave.

But maybe Big Mo asking me to meet him at the Mobambo meant something.

Maybe after all these years Moe had me in mind for a promotion.

Maybe I could move out of that crumby shotgun apartment on Hester Street and get something classier.

Maybe I could buy a new suit.

Maybe I could even get a car. Nothing fancy, nothing new, maybe just like a ‘41 Ford, one of them two-door coupe jobs maybe.