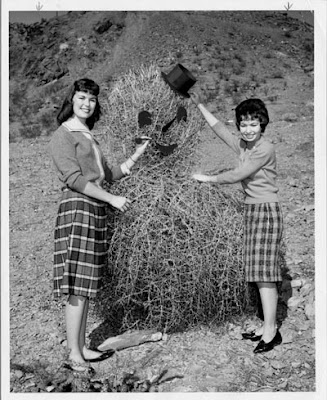 As a very special miserably-hot-day special edition of the Dan Leo Chesterfield King-Size Award Theatre, we proudly present, by popular demand, a rebroadcast of the following episode, originally presented May 24, 2007...

The year was 1965, and for some time the young Simon Gratz High grads Patty and Rachel, sales assistants and apprentice bakers at Fink’s Bakery on Spencer Street, had been experimenting with what they called “weed art”. They would wander through the abandoned lots and woods and construction sites of Olney with an Acme shopping cart and collect weeds and twigs and other odd bits of trash and detritus, and in the basement of the O’Donnel house on Sparks Street they began to create the masterpieces which would soon bring them fame and a certain amount of fortune.

After working in obscurity for a few months the girls decided to enter one of their favorite creations, “The Sticky Twig Man” (pictured above), at the annual Autumn Art Show at Sturgis Playground over at 65th and Second. Much to their delight they won third prize (a $50 gift certificate at the Mitzi Shoppe on 5th Street), and to their even greater surprise the very photo reproduced here was printed in the “Neighborhood Fun” section of the Evening Bulletin.

As it so happens the famed artist Andy Warhol and his entourage were in town that day for Andy’s first American museum exhibit at the Institute of Contemporary Art at the University of Pennsylvania.

Andy saw the newspaper photo of the girls and the “Sticky Twig Man” and pronounced it “really neat”. The “Factory” stalwart and Warhol right-hand man Gerard Malanga got on the case and tracked Patty and Rachel down. The girls agreed to meet Warhol at their favorite local stopping place The Three Babes diner on Fifth. Yes, it was a wild night at the Three Babes when Andy arrived with superstars Baby Jane Holzer, Edie Sedgwick, Candy Darling and the ubiquitous Malanga, along with the writers Terry Southern and George Plimpton, the actor Dennis Hopper and, not least of all, the gallery owner Janet Fleisher. Andy loved Patty and Rachel and immediately offered them parts in his next movie, but the girls declined as they didn’t think they would be able to get their shifts covered at the bakery. They passed around snapshots of their work and everyone seemed to be impressed, not least of all Miss Fleisher, who made them an offer on the spot to show their work at her world-famous gallery downtown on 17th Street.

Well, we all know what happened next. Helped out immeasurably by the imprimatur of Mr. Warhol, the Misses O’Donnel and Greenberg sold out their entire maiden show that December at the Fleisher, fetching as much as $5,000 a piece. Not bad at all for a couple of Olney gals who were still living at home and working at the bakery!

But this famous first show proved also to be their last. Patty and Rachel, in an interview with the Saturday Evening Post, said that they felt that they had gone as far as they could with weeds and twigs, and that they wanted to quit while they were ahead.

Rachel took her money and put it down on a semi-detached on Acker Street, and shortly afterwards moved in with her new husband Dave, a mechanic at the Atlantic station down at Fifth and Somerville. Patty for her part bought a brand-new Thunderbird. Rachel continued to work at Fink’s until she and Dave had their first baby. Patty went to nursing school and worked for many years at Einstein Hospital on Old York Road.

Their most famous work, “The Sticky Twig Man”, was recently auctioned at Christie’s for $750,000.

(Kindly turn to the right hand side of this page for a listing of other "Tales From the O-Zone", made possible by a grant from the Arnold Schnabel Society of Philadelphia, PA.)

And now, a word from the Shangri-Las:

Now if I had ever had a burst of creativity resulting in a "Sticky Twig Man," I would never, ever have let that man go. He couldn't very well run away from me. So if I had put him together, I'd probably be lying around all sticky and full of twigs right now. Patty and Rachel were right to quit when they peaked, but how they must mourn that sticky man!

And Andy snuck out the back of the Three Babes Diner with a case of Brillo pads and a can of Campbell's soup.

I'll bet you a dollar that Andy got the idea for the Brillo pads and Campbell's soup from Rachel and Patty. These girls were way ahead of the curve.

The Shangri-las rock my soul.

This story was very entertaining, especially becuse I love Andy Warhol and could see him and entouragw around thw Avant-Gardistes. Congratulations.

Thanks, Tina. I'm a Warhol fan too, and I love imagining him and his posse hanging out with Patty and Rachel up in the old neighborhood