“The Philosopher and the Fool” 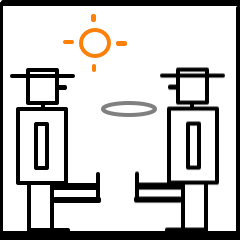 Gerry (“the Brain”) Goldsmith awoke again, to the rumble and roar of the Third Avenue Elevated passing by outside his window, and now it was daytime. What day was it? How long had he been ill? He touched his face and felt a soft growth of stubble. Gerry shaved religiously every other day, so it must have been several days at least. He looked out the window and when the train had passed the sky above the tracks and the rooftops across the Bowery was a deep flat grey, like a great wet circus tent covering the world.

Gerry propped himself up on his elbows and realized he was wearing his pajamas, his one pair of pajamas, the flannel worn soft and thin and frayed at the cuffs, of a color faded from a once vibrant swirling ocean blue to that of the East River in that uncertain half hour before the night has ended and the day has begun.

He lay there for perhaps five minutes, a thousand thoughts welling up from the depths of his brain and disappearing into the universe.

It occurred to him that he was well, or, at least no longer ill, or at least not seriously ill, and he remembered in brief snatches of moving images and sounds his young friend Araminta taking care of him, giving him tea to sip, and soup to try to swallow, Araminta holding the bowl in one hand and a spoon in the other, murmuring soft words as she patiently brought the spoon to his lips.

He pushed off the two old army blankets, moved his legs off the small bed and sat there on the side of the bed for another few minutes.

How close had he come to dying? What a pity it would have been if he had died before finishing his magnum opus, more than two decades in the writing, current title Pensées for a Rainy Day. But, on the other hand, perhaps Araminta would have assembled his completed pages and found a publisher, and his death might even have been a romantic selling point for this addition to the canonical list of distinguished posthumously published unfinished masterpieces, like Chaucer’s Canterbury Tales, or Coleridge’s “Kubla Khan”, or Flaubert’s Bouvard et Pécuchet, or Pessoa’s Book of Disquiet…

Gerry absentmindedly rubbed his sleeve on his nose, and realized that the cloth of his pajamas actually smelled freshly laundered. And so Araminta had even made that extra effort, apparently taking the pajamas down the street to Madame Chang’s shop. He then noticed that several missing buttons on the pajama jacket had been replaced, either by Araminta or Madame Chang. He also suddenly realized, with a sort of internal gulping sensation, that Araminta must have put him into the pajamas, and so of course she had seen his naked, pale, middle-aged body, in all its absence of glory…


An hour later, Gerry had taken a bath, shaved, and dressed in one of his two suits, the Harris tweed his mother had bought him at Brooks upon his graduation, without honors, from Harvard, twenty-seven years ago, as opposed to the newer (albeit from Goodwill) Donegal tweed. The suit fit him better than it had in years, he could even button the fly all the way to the top, and so he must have lost ten or perhaps even fifteen pounds in his illness.

It was his intention to go downstairs to the second floor to Araminta’s flat, and, if she was in, to thank her, humbly and sincerely. It was all he could do.

But before he went to his door he saw his old Royal portable sitting on his little writing table. He went over to it, and in the platen of the machine was a sheet of paper at the top of which was the last pensée he had typed before falling ill:

“The only way to be sure not to say something stupid is to say nothing. Therefore I shall leave the following page of this work entirely blank, thus ensuring that at least one page of it shall not be utter nonsense.”

Gerry sat down, rolled out the sheet of paper and laid it face down on the pile of completed pages to the right of the typewriter. From the stack of fresh paper to the left of the machine he picked up one sheet and laid it on the pile to the right, and so that was the one page on which no nonsense had been written. Then he picked up another fresh sheet and rolled it into the machine. He was now free to write more nonsense.

There was a half-smoked Bull Durham lying in the ashtray next to the typewriter – how old? Three days, four? A week? No matter. He put the butt between his lips and lighted it with a match from the box of Blue Tips. Then he typed:

“One day a philosopher and a fool met on the road, and they decided to exchange identities. No one ever noticed the difference.”

There, that would do for a day’s work, especially after coming off a serious illness, perhaps even a brush with death.

As was his wont, Gerry left the sheet of paper in the machine, all the better to resume his work next time, if he were granted a next time. He stubbed out the Bull Durham butt in the chipped ashtray (emblazoned with the legend THE ST CRISPIAN HOTEL – OUR SERVICE IS SWELL), and then he got up, went to the door, opened it and went out.

He hoped Araminta would be home.

{Kindly go here to read the “adult comix” version in A Flophouse Is Not a Home, profusely illustrated by the illustrious rhoda penmarq…}
Posted by Dan Leo at 11:24:00 AM