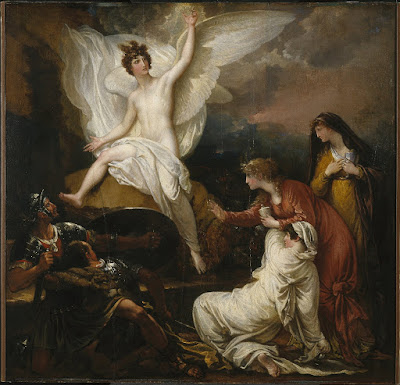 Let’s rejoin our hero Arnold Schnabel here amidst a drunken crowd in Bob’s Bowery Bar, on this momentous rainy night in a version of August of 1957; in attendance also: that roistering nautical adventurer Big Ben Blagwell, “Josh” (aka the son of God), and Ferdinand, the loquacious fly…

(Please click here to read our immediately previous thrilling chapter; the curiously intrigued may go here to return to the far-off and half-forgotten beginnings of this Gold View Award™-winning 63-volume memoir.)

“And so is Arnold Schnabel’s towering chef-d'œuvre indeed a memoir, or a roman fleuve, or a religious testament? Could it perhaps be all three?” – Harold Bloom, in The Sports Illustrated Literary Issue.

I raised my hand and extended it towards Ben’s massive waiting hand, but then I had another attack of honesty or cowardice, cowardly honesty let’s say, and I quickly closed up my fingers and drew my hand back.

“Ben,” I said, “before you shake my hand, I just want to ask you please not to crush it.”

“Gee, Arnie,” said Ben, and he did look somewhat hurt, I have to admit. “I had no intention of crushing your hand.”

“I know,” I said. “But you’re very strong, and I’m afraid that in an access of enthusiasm you might crush my hand.”

“I promise I will be gentle,” he said.

“Ha ha, I love this,” said Ferdinand, who was still hovering in the plume of smoke trailing up from the Sweet Caporal in Ben’s left fist.

“Hey,” said Ben, addressing Ferdinand. “I’m sorry if I’m a strong guy. But you just wait until we get in a scrape. Then maybe you guys will appreciate it how strong I am.”

Actually I think he just wasn’t paying attention. He really was taking on what seemed like very human traits.

“I’m only saying,” said Ben, “that these guys will appreciate it and be thankful how strong I am if we get in a rumble.”

“There ya go,” said Ben. “You guys hear that? And that is coming from the son of God himself.”

“Retired son of God,” said Josh, with a slight smile, a smile that almost wasn’t a smile. “I’m a human man now, remember.”

“Yeah,” said Ben. “But still. You used to be the son of God, so that’s got to mean something.”

“Not that I was ever much for religion myself,” said Ben.

“Well, I’m sure you have your own personal code,” said Josh, “a sort of personal religion –”

“And I think that’s quite a legitimate choice –” said Josh.

“I seen too many guys praying, begging for God to help ‘em when they was burning up down in the boiler room after the ship got hit by a Jap torpedo.”

“Well, I can see how an experience like that –” said Josh.

“So what’s the point of praying?” said Ben.

“Well, I think that some people think that prayer is a way to, to, uh –”

“So, yeah,” said Ben, cutting in. “I am not exactly what you would call the religious type. In no way, shape or whatever.”

“Form,” said Ben. “In no form am I even remotely religious. And I hope you don’t mind me saying that, Josh.”

“Okay, we get it,” said Ferdinand.

He paused, as if he had forgotten what he wanted to say, and I noticed that now he was sweating even more profusely, more so than even Ben or me.

“But –” said Josh, and then: “Oh! I remember now. Just that you may not be ‘religious’ per se, but I think it’s true that nonetheless you have a code, a sort of personal code, which, which, uh  –”

“I got a code,” said Ben. “My code is that you look out for your buddies. That’s my code.”

“And an excellent code it is,” said Josh.

He took his handkerchief out of his pocket and mopped his brow under the brim of his straw trilby.

“What’s so funny is the way you’re torturing poor Josh.”

“No,” said Josh, and, stuffing his handkerchief any old way back into his breast pocket, he quickly looked away, into that crowd of dancing and thrashing drunken people that surrounded us.

“See?” said Ben, addressing Ferdinand. “Josh says I’m not torturing him. ‘Cause all I’m saying is that even if he is the former son of God I don’t hold that against him.”

“You don’t hold what against him?” said Ferdinand.

“Not helping them poor shipmates of mine who were praying to him while they was getting burnt alive.”

“Getting eaten up by sharks in the water.”

Josh had turned to face Ben again. Ben took a great drag of his Sweet Caporal, then exhaled the smoke in Josh’s direction.

“Okay, Ben,” said Ferdinand, “let’s get back to the booth and order some drinks.”

Josh heaved a great sigh. He glanced away again, into that mob of dancing, thrashing, shouting and laughing drunkards, then he turned back to Ben. It seemed as if he were trying to think of something to say, but coming up blank, and finally all he said was, “Uh –”, and then nothing.

“But I don’t hold it against you, Josh,” said Ben, and he gave Josh a little punch on his left shoulder, little for Ben anyway, because Josh managed to remain on his feet, although he did stumble back a step. He rubbed his shoulder with his right hand and he looked at Ben.

“Look, I’m sorry for everything, Ben,” he said.

“Really?” said Ben, but not in a sarcastic way.

“I’m really sorry,” said Josh, “that I, we, allowed your friends to suffer, and die, but – and you know, I too was tortured, scourged, horribly tortured, even a crown of thorns, and crucified –”

“The screaming,” said Ben, looking off into that crowd of drunks.

“Okay,” I said. The thing was, or one of the things was, that I was beginning to feel the return of all my various aches and physical agonies, in my knees and legs, my arms, my face and head, in other words the pill that Bowery Bert had given me was starting to wear off, but nevertheless I cautiously extended my hand again.

I know, or I’m pretty sure, that Ben didn’t mean to crush my hand, but in fact he did grip it in that fashion that my favorite writers would call 'vice-like', and soon pain exploded from my hand, forcing me to yelp and curse.

“Ow! Fuck!” I said, yes, I said, yelled, yelped that latter word in the presence of the son of God, even if he was only a man now.

“It’s okay, Ben,” I said, although it really wasn’t okay, as I waved my paralyzed fingers in the smoky air in front of me, although this waving did nothing to mitigate the waves of pain pulsing from fingerbones, knuckles and joints. “Look, let’s just get back to the booth and order some drinks, okay?”

“Good idea, buddy,” he said. “Gee, it seems like we’ve been trying to get back to that booth for weeks, don’t it? You ready, Josh? No hard feelings, right?”

“No, of course not,” said Josh. He had finally stopped rubbing his shoulder, and he looked as if he needed a stiff drink.

“Let’s move,” said Ferdinand, buzzing around in an excited-seeming way. “I feel like I could chug a whole shot glass of that bock beer!”

Ben raised his great hand again, with an obvious view to giving me the same sort of supposedly comradely blow on the shoulder he had given to Josh, but the last thing I needed was another source of pain and so I quickly turned away and struck off through the mob in the direction of the booth, bolts of pain shooting up from my knees, my right knee primarily, but the left one was nothing to be sniffed at either. I stumbled and limped and shoved my way, holding my crushed right hand close to my chest.

All I wanted to do was to get to my blank book as soon as possible and try to write myself out of this world and back to my own world – but would I even be able to hold the pen in my hand? Would I be able to concentrate on what I was writing through the myriad agonies that were now rising up from a dozen points in my current corporeal host?

I felt the need for whiskey, and beer, to dull the pain, and, yes, the alcohol would only cause me to suffer another sort of agony when I woke up the next day, if there ever was a next day, and if I ever woke up in it: the agony of hangover, but that was in the future, and this was now, and I wanted whiskey, and beer to wash it down with, I wanted them both the sooner the better, and I made a hurried mental note that when or if I finally did start writing my way into my own world that I would stipulate in the text that I should not be in pain – in other words I would be in a fantasy world.


(Continued here; Arnold has only just started to warm up.)

(Please scroll down the right hand column of this site to find what the editor hopes to be an up-to-date listing of links to all other publicly available chapters of Arnold Schnabel’s Railroad Train to Heaven©. Please do yourself a favor and click here to order our prolific friend rhoda penmarq’s new book {under the nom de plume “fred flynn”} “darkness, my home town, and other stories”.)